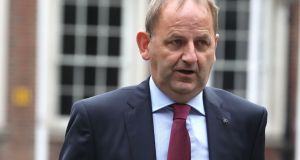 Sgt Maurice McCabe at the tribunal in Dublin Castle. “Ms D” said on Monday she grew upset in 2013 as Sgt McCabe’s case became prominent in the media. Photograph: Collins Photos

The woman who alleged she was sexually abused as a child by Garda whistleblower Sgt Maurice McCabe has said she wanted the public to know that there was “another side to the man”.

The witness, who is being described as Ms D, said she grew upset in 2013 as Sgt McCabe’s case became prominent in the media.

“I was furious. I was fed up of listening to him being portrayed as an honourable man. I wanted to vent.”

Ms D told Kathleen Leader, for the tribunal, that she had a “personal grievance against Maurice McCabe” arising from the alleged assault she said had occurred in 1998.

In 2013 and 2014 she was “trying to cope” with him being described as a “great figure and an honourable man”. She wanted people to know he was not “the saint he was being portrayed to be.”

She said that she subsequently met crime journalist Paul Williams, the leader of Fianna Fáil Micheál Martin, and the former minister for justice Alan Shatter, to raise the issue of her unhappiness with how the allegation against the sergeant that she had made in 2006 was investigated by the authorities.

Ms D sent an email to Mr Guerin and said she felt that her case was just as serious as many of the cases that were being brought to the attention of the Dáil. “I wanted my case to be looked at again,” she said, growing emotional. “No one seemed to be listening to me.”

Ms D alleged in 2006 that she had been sexually assaulted in 1998 when, as a six-year-old child, the sergeant had engaged in inappropriate movements during a game of hide and seek. The allegation was investigated and the Director of Public Prosecutions decided that even if the allegation, which was contested, was true, it would not constitute an offence.

Responding to Michael McDowell SC, for Sgt McCabe, the witness agreed that she met Mr Williams after her father, who is a garda at Bailieboro station, was asked by Det Supt John O’Reilly if Ms D would speak with Mr Williams.

Ms D said she was asked by Mr Williams if she would meet Mr Shatter whom, she was told, wanted to meet her. She met Mr Shatter on a Monday or Tuesday in the Merrion Hotel in Dublin, and on the Thursday, Mr Shatter, who had by then resigned, raised the matter in the Dáil. She felt that nothing had happened after her meeting with Mr Martin.

The witness said she felt Sgt McCabe was raising concerns about how some cases were investigated in the Bailieboro district, and she wanted her case investigated too. She made a complaint to the Garda Síochána Ombudsman Commission in 2014. She agreed with Mr McDowell that her father had been moved to other duties after a disciplinary tribunal was appointed on foot of actions by Sgt McCabe.

This was in January 2005, “11 months before you first made an allegation against Sgt McCabe?” Mr McDowell said. “Yes, that’s correct,” said the witness, visibly becoming emotional. She agreed with Micheál O’Higgins SC, for the Garda, that Det Supt O’Reilly was a “long-time friend” of her father.

Mr O’Higgins said the detective sergeant would say it was Mr D who raised the issue of Williams during a social meeting, and asked his friend for his opinion of him. Det Supt O’Reilly said he was “okay”. He later gave Mr D the journalist’s phone number.