Law forcing mothers to adopt their own children is quashed 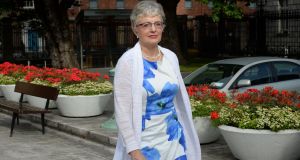 Minister for Children Katherine Zappone has said she will commence the provisions of the law as soon as possible. Photograph: Dara Mac Dónaill

A legal requirement that forced birth mothers to adopt their own children when their partners wished to adopt them has been removed.

The Adoption (Amendment) Bill 2016, signed into law by President Michael D Higgins on Wednesday, will also make it easier for foster parents to adopt children in their care.

Minister for Children Katherine Zappone has said she will commence the provisions of the law as soon as possible.

Since legal adoption was introduced in Ireland in 1952, if a woman whose partner was not the father of her child wanted him to adopt the child, she first had to give up her legal rights to the child and then adopt the child along with her partner.

The child’s birth certificate was replaced with an adoption certificate on which the natural mother was shown as the child’s adoptive mother.

The Adoption Authority, lone-parent organisations and legal practitioners had lobbied for the removal of the requirement for many years.

Under the new law, the step-parent will be the sole adopter and the mother will not have to adopt her own child.

The law also removes the ban on the adoption of children of married couples who give their consent. And it provides the High Court with revised criteria under which it can authorise adoption without parental consent.

This means children in foster care may be adopted if their parents have failed in their duty towards them for three years, when there is no reasonable prospect of parents caring for them, and when children have spent at least 18 months living with the applicant carers.

In line with the constitutional amendment on the rights of the child, the law also includes a requirement that the best interests of the child are paramount in decisions made about them by the Adoption Authority. And where the child is capable of forming a view, the authority or the court must ascertain it. The law also provides for the adoption of a child by civil partners and co-habiting couples.

Commenting on the signing of the law, Ms Zappone said she welcomed all of the positive changes to the adoption regime.

“I am conscious of the importance of providing for an adoption process that is fully inclusive of everyone involved, and where children’s best interests are always at the heart of decisions involving them,” she said.