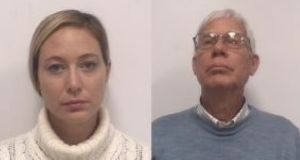 The murder trial of Molly Martens Corbett and Thomas Martens over the death of Limerick man Jason Corbett begins on Monday at the Davidson County Courthouse in Lexington, North Carolina.

Mr Corbett’s widow and her father are charged with second-degree murder and voluntary manslaughter in connection with an incident on August 2nd, 2015.

The 39-year-old was found beaten to death inside his home in Wallburg, North Carolina where he lived with Ms Marterns and his two children from a previous marriage.

A postmortem report said Mr Martens “apparently struck him in the head numerous times with a bat and a landscape type rock” before calling the emergency services.

In the 911 call, released in January 2016, Mr Martens, a retired FBI agent, told authorities he entered the couple’s bedroom after he heard a disturbance. According to emergency personnel and sheriff’s deputies, Mr Martens said he observed Jason Corbett choking his daughter. He allegedly intervened and beat his son-in-law to death.

In December 2015, Mr Martens and his daughter were indicted by a grand jury.

Attorneys for Ms Martens and her father filed a motion in May that would have moved the trial to Mocksville in nearby Davie County due to the publicity surrounding the case locally.

In the motion, it was argued that publicity surrounding the case in Davidson County had “created a substantial prejudice against them” which would preclude them from obtaining a fair and impartial trial. However, Superior Court Judge David Lee ruled the trial would not move.

Judge Lee also deferred ruling on a second motion to redact statements made by Jack and Sarah Corbett, Mr Corbett’s children. The statements were made regarding their exposure to domestic violence.

The comments in question took place during interviews at The Dragonfly House, a child advocacy centre, following Mr Corbett’s death.

After Mr Corbett’s sister Tracey Lynch and her husband David were awarded custody of the children in 2015, both contend that Jack told them he lied about witnessing his father abuse Ms Martens.

Lawyers for the defence argue that testimony from the children should be admissible, as they were given specific instructions about the interviews in which they participated. The defence further stated that staff at The Dragonfly House, consulted with the children to determine whether they knew the difference between the truth and a lie before asking a series of questions.

Davidson County Assistant District Attorney Alan Martin acknowledged the child advocacy centre has been enormously advantageous in cases of abuse, but suggested it is not designed to be an institution that generates statements admissible in court.

David Lynch testified that he asked Jack’s permission to tell the authorities in Davidson County what he said. The Lynches then contacted the Davidson County Sheriff’s Office, they said, to inform officers of his alleged deception.

The judge said in a county with over 162,000 residents, he believed an impartial jury could be selected and that process begins on Monday.

1 Murder in a crowded house: The full story of the Patricia O’Connor trial
2 Shane Ross: ‘I lost a friendship with Mattie McGrath completely. He got totally personal’
3 Coronavirus: Aer Lingus cabin crew in self-isolation after passenger’s positive test
4 Areas advised to ‘stop everything’ as Storm Jorge hits Ireland
5 ‘Nobody cares’: Children freeze to death as Syrians flee onslaught in Idlib
Real news has value SUBSCRIBE