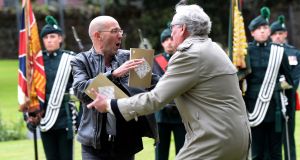 A protester who was wrestled by the Canadian ambassador at a 1916 commemoration ceremony in Dublin has been given a chance to avoid a criminal record.

In the Circuit Court, Judge James O’Donohue held that Brian Murphy (48), of Newcastle, Co Dublin would be given the Probation Act if he donated €900 to charity and apologised to the garda who arrested him. Judge O’Donohue also suggested he write a letter of apology to Canadian ambassador Kevin Vickers.

Murphy interrupted a televised 1916 commemoration service for members of the British army, held at Grangegorman military cemetery, on May 26th last year.

He was found guilty in the District Court on a Public Order Act charge of engaging in threatening and abusive behaviour. He received a two-month sentence which was suspended for one year.

He appealed to the Circuit Court, but Judge O’Donohue rejected the appeal. However, the judge said he would spare him a conviction if he apologised publicly, donated €900 to charity and said sorry in private to Garda John Cahill. Murphy told the court he apologised to anyone who was insulted.

The case was adjourned until January.

1 ‘Everyone still thinks it’s a joke’ - parents of toddler with coronavirus speak out
2 Ireland has strategy to ‘break the chains’ of coronavirus - WHO’s Mike Ryan
3 Miriam Lord: You cannot cocoon democracy – or can you?
4 UK makes another coronavirus U-turn but doubts over strategy linger
5 Childcare workers laid off by employers who still had State subsidies
Real news has value SUBSCRIBE