Farmers urged to tag all equipment and remain vigilant 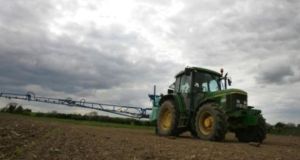 The Irish Farmers’ Association has called on farmers to tag all their equipment. Photograph: Bryan O’Brien

The Irish Farmers’ Association has called for “greater awareness” to be placed on tagging.

The call comes just weeks after gardaí held an open day to return stolen items to farmers and builders across the country.

“The gardaí had two open days recently in the hope of returning recovered machinery to the rightful owners but I believe 90 per cent of the equipment recovered was not tagged so it’s made it impossible unless the owners come forward.

“It wasn’t big machinery but there was a considerable amount of tools and equipment. The advice we are giving to farmers is to tag all their equipment, particularly the more expensive items,” said the IFA president.

“It’s surprising what the gardaí have been able to recover in recent months,” said Mr Bergin.

Last month gardaí in Tipperary and Kilkenny tried to reunite stolen property with their owners. Members of the public were invited to view a large quantity of agricultural and gardening equipment and industrial generators.

The items, which were presumed to have been stolen during a series of burglaries in Ireland and the United Kingdom, include strimmers, chainsaws, drills and many more power tools.

“Some people who attended the two Garda open days were successful in retrieving some of their stolen property. We have been calling on farmers to mark equipment in whatever way they can. We [IFA] have a service called ‘theft-spot’ which we encourage people to use,” said Mr Bergin.

“Clearly, there are and certainly was in the past a rural gangland element to the criminals carrying out the robberies. Thanks to the work of the gardaí and the arrests which were made over the past few months, there has certainly been a reduction in the burglary rates but this doesn’t mean people have to be less vigilant.”

A senior garda said that the growing problem with recovering large stolen farm machinery is that there is no way of identifying an owner if the machine is not properly tagged.

“It’s a big problem for us to return items recovered in robberies if there is no tag or ID. This is why we held the recent open days, but many of those items remain unclaimed,” said the source.

The IFA currently has a summer campaign in operation which encourages the farming community to take extra care and be vigilant during the summer months while leaving machinery and equipment unattended.

“The farming community need to keep their vigilance up at all times and report any suspicious activity to the gardaí. For example, one of our new schemes that we have started for our own members is a free security audit of their farm by security professionals. IFA members will give them a bit of advice but it’s a way to give practical advice on staying safe.”

Mr Bergin said that they have been telling the farming community to only buy from genuine sources and to not engage with any dubious sources.