Groups are still ‘leagues behind’ jihadis and the far-right on use of digital, research finds 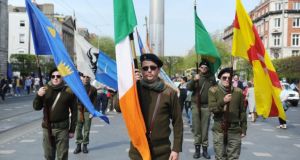 Dissident republican groups operate broad but unsophisticated online networks to recruit and spread propaganda, according to an extremist monitoring group.

Analysis of Facebook networks found supporters of such groups tend to be older than other extremist groups, such as jihadi and far-right organisations, and less capable of recruiting new members.

However, the research gathered in 2015, and released to The Irish Times, does not cover the online actions of Saoradh, which is seen as the political arm of the New IRA which killed Derry-based journalist, Lyra McKee last week.

The online networks of Republican Sinn Féin (RSF), linked to the Continuity IRA, and the 32 County Sovereignty Movement (32 CSM), associated with the Real IRA were examined by Moonshot CVE, a technology firm.

The data led by counter-extremist expert, Ross Frenett shows support for the groups was most concentrated in Armagh and Derry. In the Republic high levels of support were detected in Kildare, Leitrim and Westmeath.

The vast majority of sympathisers were male (74 per cent). Supporters were most likely to be aged 21-30 (41 per cent) or between 31-40 (27 per cent). Only 6 per cent of supporters were under 21, a very low number compared to other extremist groups, said Mr Frenett.

Through research on republican message forums and social media, Moonshot identified a small core group of RSF or 32 CSM profiles. Analysis of the friend networks of such profiles revealed a network of 6,322 individuals.

The organisation could confirm at least 1,947 lived in Ireland. A significant number of profiles did not list a location meaning this figure is likely to be much higher.

Outside of Ireland, the biggest concentration of supporters was in Scotland with 883 confirmed as living there.

However despite the wide network of supporters, only 639 were linked to more than one of the core Facebook pages of either group. This paints a picture of thousands of passive sympathisers but very few activists, Mr Frenett said.

An unusual aspect of the networks was that both groups tended to use personal Facebook pages rather than official pages to organise, spread information and recruit members.

Mr Frenett said Moonshot conducted an interview with a senior 32 CSM member who said this was done purposely to avoid scrutiny by the authorities and by Facebook moderators.

Much of the content shared on the networks was propaganda about dissident republicanism, while the networks were also used to organise marches, protests and raise money.

Few threats of violence were recorded, but efforts to intimidate were widely spread, including encouragement to people to report on on “hoods” (petty criminals) in their local area, alongside a picture of a gun.

General praise for dissident activities was common as were posts urging readers to “join the IRA”. However they stopped short of giving details. “They would say join the IRA but they wouldn’t say, ‘Here’s the address of the local recruiter’, ” Mr Frenett said.

Researchers were very surprised by the age profile of those involved, particularly how few are under 21 years old. “It’s not a good look. It looks to me like they’re aging organisations which are having trouble attracting new members. “It’s one data snapshot but if its replicated it spells serious trouble for these groups,” he said, adding that the lack of sophistication in online messaging and recruitment also indicates they are “organisations in decline”.

“For now they’re certainly not the best when it comes to using digital space to recruit. A lot of the posts link to their newspapers or posters which is, frankly, not particularly advanced.”

Both RSF and 32 CSM have improved since the main body of research was done, but they “are still leagues behind” jihadi and certain far-right extremist groups, he went on.

Moonshot was founded in 2015 with backing from Google and receives Government funding to track extremist groups online and to steer potential recruits away.

London-based Moonshot, which offers at-risk individuals counter-information and links them with counsellors, recently won a $1.5 million (€995,000) contract from the Canadian government to jihadists and online extremists in Canada.

However, it funded the Irish research itself : “There’s just not much interest in the area compared to other extremism,” said Mr Frenett. Information gathered cannot be passed onto the security services, even if they ask for it, he said.