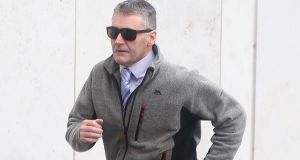 Former INLA figure and so-called Border Fox Dessie O’Hare is likely to serve just over 4½ years in prison for his latest convictions.

O’Hare (62), who was released early from prison under the terms of the Belfast Agreement after being jailed for 40 years for the kidnap of Dublin dentist Dr John O’Grady, cannot have that sentence reactivated.

O’Hare (62), of Slate Rock Road, Newtownhamilton, Co Armagh, was on Thursday sentenced to 10 years with three suspended for false imprisonment and three years for assault during an illegal violent eviction attempt in June 2015.

The Special Criminal Court heard O’Hare told gardaí he was working for businessman Jim Mansfield jnr on the day of the attack, an allegation Mr Mansfield has strongly denied.

O’Hare is automatically entitled to remission of 25 per cent, meaning his seven year sentence is reduced to five years and three months.

If he is of good behaviour in prison, as he has been in the past, remission of one-third would apply meaning his time in prison would be reduced further to four years and eight months.

He was sentenced to 40 years in prison in April 1988 for the kidnapping for Dr O’Grady. O’Hare cut off sections of two of Dr O’Grady’s fingers during a 23-day ordeal.

O’Hare was released under the Belfast Agreement in April 2006. That release was revocable, by the minister for justice, at any time if O’Hare engaged in crime.

However, security sources told The Irish Times O’Hare would have been entitled to remission on his 40-year sentence, reducing it to 30 years.

And because the 30-year period he would have been in jail has now expired, none of his sentence for the Dr O’Grady kidnapping remains to be activated.

The Department of Justice declined to comment on O’Hare’s case but said remission applies to all prison sentences apart from life.

“In circumstances where a sentence imposed by a court has been served,” as was the case with O’Hare, “there is no question of its subsequent ‘reactivation’,” it said.