Murder in Creggan: ‘I’ve never heard of anyone I know being shot dead’ 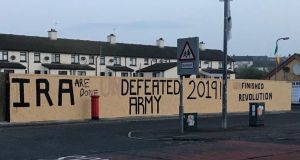 On Friday, some of Derry’s graffiti was repainted.

On Thursday night a 29-year-old journalist, Lyra McKee, was shot dead during rioting in the estate; by yesterday morning a police cordon and the remains of a burnt-out car were the only visible evidence of the tragedy of the night before.

The dissident republican group the New IRA has been blamed. As the people of Derry and the world woke on Friday to the news of Ms McKee’s death, the parish priest, Fr Joe Gormley, went on local BBC radio to tell them they were not welcome in Creggan.

“There are so many good people in our parish,” he said, his voice shaking with emotion and suppressed anger, “and these people go into our area and use us to carry out such vile acts . . . How dare they? How dare they do it?”

By yesterday afternoon the people of Creggan were on the streets. Thousands crowded into Fanad Drive – the scene of the fatal shooting – where a platform had been set up just in front of the police tape.

Young and old, children and teenagers, parents and pensioners, they all gathered to show their solidarity with Ms McKee’s family and friends and their opposition to her killers.

“I’m only 30,” said one young woman, Tanya. “My family are from Creggan, and I’ve never heard of anyone I know being shot dead.

“I felt it was important to come to send a message that this not done in our name.”

Many others agreed – among them the DUP leader Arlene Foster, who was applauded by the watching crowd when she admitted it was her first visit to Creggan. “It doesn’t matter whether you’re a Catholic or a Protestant, or whether you identify as Irish or British,” she said. “When people come out with guns to shoot people from their own community then we have to say, enough is enough.”

Once, her presence in the staunchly nationalist Creggan would have been unthinkable, and its symbolism was not lost on those present. So too was the presence in the crowd of the Deputy Chief Constable, Stephen Martin, and a private gesture – two PSNI constables who removed their hats and blessed themselves on entering the nearby St Mary’s chapel. “I never thought I’d see that day,” went one overheard conversation.

In the face of such tragedy, there was much talk of hope – from Ms McKee’s partner, Sara Canning, who was determined that her loved one’s death would not be in vain, from politicians, and from community workers and representatives.

“This is what community is,” Stevie Mallett from St Mary’s Youth Club told the watching crowd. “It’s whenever we all come together.

“I think many of the young people who may have supported [dissident republicans] in the past have a very different mindset today.

“Let’s hope this is the beginning of something, that we change this attitude. I never want to be here standing like this again.”

This could be a watershed moment. “The dissidents are coming under intense pressure,” said security journalist Eamonn MacDermott. “They have brought themselves to world attention in a way they didn’t want.”

The dissident commemoration parade on Easter Monday – which last year sparked serious rioting – has been cancelled in the wake of Ms McKee’s death.

“It will be a setback for them,” said Mr McDermott. “How big a setback remains to be seen.”

Creggan has been here before – not least during the Troubles; in the years since the Belfast Agreement, people in Creggan, Derry and Northern Ireland have stood on the streets and called for peace after other murders.

Emmet Shiels, shot by dissident republicans only yards away while delivering a pizza 10 years ago; PSNI constable Ronan Kerr, blown up as he was getting into his car in Omagh in 2011; the Omagh bomb itself, which killed 31 people and unborn twins, are just some of those who have died during the peace.

Yet on the lampposts of Creggan hang Tricolours and dissident flags; dissident graffiti mars freshly-painted railings.

In 2014 there was sufficient support for the dissident message – or disaffection with mainstream political parties – to elect a councillor, Gary Donnelly, then a member of the dissident republican group the 32 County Sovereignty Movement.

Donnelly is running as an Independent in the North’s council elections next month, and his success or otherwise will inevitably be viewed as a barometer of local attitudes towards dissident republicans.

Police yesterday were adamant that the threat level has not increased. It consistently stands at “severe” in Northern Ireland, meaning an attack is highly likely.

In Derry, the New IRA is viewed as the most significant threat; it was blamed for the car bomb which exploded outside the city’s courthouse in January.

It is far from a majority: the numbers of dissident republicans in Northern Ireland is estimated at several hundred, while those willing to take an active part in a shooting or bombing are much fewer, about 50.

Yet for all that, they retain the capacity to kill. “Bringing a firearm out and firing it down the street in a residential area where they knew lots of people were standing about is a calculated and callous act,” said Assistant Chief Constable Mark Hamilton.

“It can only be designed to hurt and kill people. Bullets stop somewhere,” he said, “and on this occasion stopped fatally.”

In Creggan, as in Derry as a whole, that fatal bullet has provoked sadness, shock, anger. The city’s mayor, John Boyle, physically shook as he described the “bright, warm, witty, outstanding individual who had been a great friend to so many in this city”.

“There is an awful lot of anger in this city today,” he said. “This was not done in the name of the people of the city.”

McKee would have agreed with him. She wrote on Twitter before her death: “Derry is such a beautiful city. I’ve fallen in love with it over the past year, while falling in love with a woman who hails from it.

“Here’s to better times ahead and saying goodbye to bombs and bullets once and for all.”