Decision not to charge teens over Waterford acid attack upheld

‘This was grievous bodily harm’ yet perpetrators get ‘a slap on the wrist,’ says victim’s mother 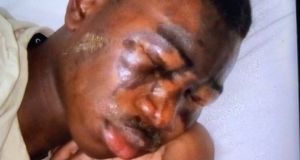 Tega Agberhiere (17), a youth player for Waterford FC, suffered severe injuries to his face and body and his eyesight was damaged when an unspecified acidic substance was thrown on him.

Two teenagers who attacked another three teens with acid in Waterford last year will not face criminal charges after an earlier decision to caution them instead has been upheld on review.

Tega Agberhiere (17), a youth player for Waterford FC, suffered severe injuries to his face and body and his eyesight was damaged when an unspecified acidic substance was thrown on him. Oisín Daly (19) and Pádraig Sullivan were also injured.

All three victims suffered severe skin burns in the incident last April in what their families say was a premeditated attack.

Christie Agberhiere, the mother of Tega who suffered very significant injuries to his face, back and legs, said her son was coping in the best way he could.

“He is carrying on with this life but it is very difficult,” she said. “When he wakes up every morning the scars are still there. It’s physical and emotional; it’s distressing for him. The good news is he’s alive.”

Ms Agberhiere was speaking to Damien Tiernan, host of the Deise Today programme, on WLR FM in Waterford.

The injured boys’ parents explained they had met with representatives of the DPP’s office in Waterford Garda station earlier this week.

They said that in December they had been told two cautions under the juvenile liaison programme - which seeks to deal with youth offenders in a manner that ensures they do not get a criminal record - were issued for two of the teenagers involved.

Pádraig’s mother Shirley Sullivan said they were told last month while one of the youths had been cautioned the other caution for the teen believed to have thrown the acid was pending review.

However, when they met the DPP’s representatives this week, the families were informed the caution that was pending would now be served. It means the decision to deal with the chief suspect by way of caution rather than to charge him with a criminal offence had been upheld.

Ms Sullivan said she was very disappointed as she believed the crime was so serious it warranted a criminal conviction. She was also upset that the offence had been treated as disorder rather than a serious assault that was premeditated and was determined to continue campaigning for justice.

“This was grievous bodily harm and for these boys to do this and get a slap on the wrist… One of these boys got a gang together, he went to another estate [where they did not live] and the other boy threw the acid,” she said.

The parents of the victims believe four perpetrators, not two, were involved in the incident which occurred in the Earlscourt housing estate.

Ms Agberhiere said her son Tega had been very badly injured to his face which had left scarring he could never cover up. She did not know what emotional impact it would have on him in the years to come.

She also said the caution that had been pending review could not be served on the teenage perpetrator it was intended for because he was now abroad working.

Both Ms Agberhiere and Ms Sullivan said they were seeking justice for their sons. And they believed the perpetrators should be charged and brought before the courts where a judge and jury could decide the outcome.