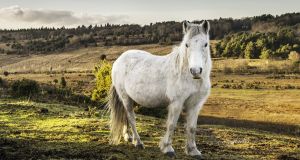 Gardaí have appealed for information after a young pony was fatally stabbed at an animal sanctuary in Co Longford. File image: iStock.

Gardaí­ have appealed for information after a young pony was fatally stabbed at an animal sanctuary in Co Longford.

Investigators are awaiting postmortem and forensic results following the incident at the Hungry Horse Outside charity in Newtownforbes.

Hilary Robinson, a spokeswoman for the equine rescue charity, said it appeared that somebody had come into one of the group’s yards during the night and stabbed the foal.

“They actually found a part of the knife stuck in the pony’s jugular,” she said. “It’s a terrible thing to do to an innocent foal. The foal’s not a year old.”

Ms Robinson described the incident as “a new low”.

“All the gates are locked. Everything is locked, barred and bolted,” she said. “They had to climb in, go in and literally, physically wrestle the foal to the ground and stab it.”

In a post on its Facebook page, the charity said “we witnessed something we never imagined we would”.

“Whilst we are aware there are already photographs circulating, we have purposely chosen not to post them to this page as we feel they are too distressing. However, this attack is the lowest of the low, it is really incomprehensible to us.”

Anyone with information about the incident to contact Longford Garda station on (043) 3350570.