Larry Dunne: The life and death of a notorious Dublin drug dealer 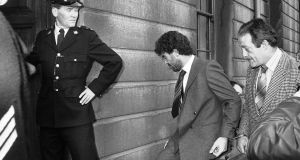 Heroin dealer Larry Dunne, who died in St James’s Hospital, Dublin, on Monday, was one of the most notorious Irish criminals from the era before the birth of modern day gangland in the mid-1990s.

Incredibly by today’s standards, he was never a suspect for any murders. However, he was blamed by gardaí for ushering heroin into Dublin - ensuring a slow death for tens of thousands of addicts, often from the most deprived streets of the city.

Dunne, who died aged 72, spent his childhood living in the Liberties and, later, in a new council house on Rutland Avenue, Crumlin. His family made a modest living from their clothes stall on Francis Street markets.

Of the 10 Dunne brothers, eight spent time in industrial schools; Larry Dunne was sent to Daingean in Co Offaly. His mother and father - Christopher ‘Bronco’ and Ellen - were both heavy drinkers who neglected their children, with domestic violence and crime a constant in Larry Dunne’s upbringing.

Bronco Dunne fathered 16 children and he once killed a man in a fight when he felt he was paying undue attention to his wife. He was convicted of manslaughter and spent 18 months in Portlaoise Prison. He was also well known to the gardaí for theft.

Larry Dunne and his siblings had a grandfather in Liverpool where many of the brothers spent time in their younger years. Larry served several sentences in British jails as a young man.

In the 1970s, Christy and Larry ran an armed robbery gang in Dublin. Gradually they became involved in the drugs trade, focusing initially on cannabis. They progressed to heroin as the 1980s approached, with brothers Larry, Christy, Shamie and Henry forming the nucleus of the Dunne drugs gang.

With a revolution in Iran and the Russian invasion of Afghanistan, lucrative heroin routes were established out of both countries and unprecedented quantities of the drug became available in Europe. Some of that heroin was imported into Ireland by the Dunnes, with Larry using the criminal contacts he had made in prison in England to source consignments.

As their heroin dealing escalated, the Dunnes drifted apart and opted to run their own heroin businesses rather than combine their efforts. Larry ran the heroin trade from Bray to Dún Laoghaire. He set up his operation in a manner that ensured he outsourced the risk of possessing his drugs to others; never handling heroin himself, with the expression “Larry doesn’t carry” becoming well known in policing and criminal circles.

He used female couriers to bring money to London, Paris and Amsterdam, and to buy drugs and bring them back to Dublin, apparently betting on the fact women would be less likely to be searched at airports.

While Larry Dunne was a constant focus of the Garda, his methods ensured he was successful. When he racked up almost 20 motoring convictions and was banned from driving, he was able to employ a chauffeur.

In May 1982, he was able to pay for a £100,000 new home with no need for a mortgage; transferring the money from his own bank account for the purchase in the days long before the Criminal Assets Bureau was established. He moved from a council house in Rathfarnham to a very large property on Woodside Road, Sandyford.

Such was his notoriety on the drugs scene, in 1982 then taoiseach Charles Haughey demanded that Garda commissioner Patrick McLaughlin have the Dunnes in prison within 12 months. In the following 15 months, 11 of the family were either convicted or arrested.

Larry Dunne’s downfall started when his house was raided and between £50,000 to £60,000 worth of drugs was found in a pillowcase on his daughter’s bed. He was in the house at the time with his wife Lily, as well as sister Colette  and brother Shamie. Larry took responsibility for the drugs.

However, in the 2½-year period between Larry Dunne’s arrest and trial he was on bail and he used the time to grow his heroin business and bank his money. About  the same time, the number of heroin addicts in Dublin reached and then exceeded 5,000.

When he was first put on trial the jury could not reach a verdict. At the time gardaí said only one jury member could not agree Dunne was guilty and they suspected jury-tampering. Around this time, the law was changed to allow majority verdicts and Dunne was convicted at a second trial.

However, as that second trial started he was granted bail for his lunch break, allowing him go to a pub close to the Four Courts, change his clothes in the toilet, and abscond.

His trial proceeded in his absence and he became the first person in the history of the State to be convicted before the Central Criminal Court while on the run.

When he absconded, much to the embarrassment of the Garda, a huge policing operation swung into action with increased checks at ports and airports. Gardaí also raided the homes of about 40 people linked to Dunne.

All the while he was hiding out in a house in Crumlin, where he dyed his hair before going to a safe house in Co Leitrim. He then sourced a cruiser and sailed down the Shannon with a group of friends, at one point falling in with a hippie commune in Co Clare before fleeing Ireland for Spain.

He settled for a period in Fuengirola and also spent time in Marbella, with British criminal Ronnie Knight, as well as in Gran Canaria and in Portugal. It was as he disembarked a ferry from Spain to Portugal in 1985 that an immigration officer suspected his passport was false and he was arrested, resulting in his extradition back to Ireland to serve his 14-year sentence.

He departed to prison reportedly saying: “If you think we’re bad, wait till you see what’s coming after us”.

Though they were credited with bringing heroin to Dublin for the first time and being the key players behind the city’s heroin epidemic, the Dunnes only ever controlled about half the heroin market in the city.

Larry Dunne’s prison sentence, which was unprecedented at the time, destroyed his drugs business and he was never a major criminal player again. The drugs scene in his native city was unrecognisable to him by the time he was released after serving a decade of his 14-year sentence, with figures such as John Gilligan and Christy Kinahan established by that time.

Dunne, who developed a heroin addiction from testing drugs he had just imported, moved to Birmingham on his release and cared for his daughter, Anita, who was also an addict and contracted HIV.

Dunne was also convicted in 2001 for assaulting plainclothes Garda detectives with a cane as the officers searched the Dublin home of a young relative of Dunne’s while Dunne was visiting.

On that occasion he claimed he didn’t realise the detectives were gardaí and when he saw a gun being produced by one of them he thought the men were vigilantes who had come to shoot him.