Declaration that PAC acted unlawfully would have ‘chilling’ effect 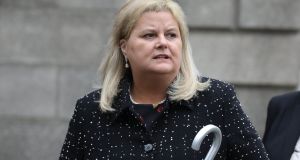 A declaration by the Supreme Court that the Dáil Public Accounts Committee (PAC) acted unlawfully towards former Rehab CEO Angela Kerins would have a “chilling” effect on the work of parliamentary committees, lawyers for the State and PAC have told the court.

The seven judge court on Monday reserved its final decision on Ms Kerins’ appeal over her treatment at two PAC hearings in February and April 2014.

It decided last February the PAC had acted outside its jurisdiction in its conduct of the hearings and the court can intervene.

It must now decide whether or not to declare the PAC conducted the hearings outside the scope of its invitation to Ms Kerins to attend before it and acted unlawfully “as a whole”.

In arguments on Monday for the PAC, Paul Gallagher SC said it accepted the court’s “significant” earlier findings but urged the court against going further and declaring unlawful action.

PAC maintains the conduct of the two PAC hearings did not substantially deviate from the scope of the invitation to Ms Kerins to attend before it, he said.

It was clear from their opening statements Ms Kerins and other Rehab attendees understood what was going to be asked, including about salaries and corporate governance, he said.

A reference in invitations to “outcomes and out-turns” covered issues concerning value for money for the €83 million public funds being paid by the HSE to Rehab to provide disability services, he said. Salaries fell within those issues, he said.

Noting the court has also to decide whether the Dáil, rather than individual members of the PAC, was the appropriate defendant, he said any such declaration against the Dáil, in its capacity as having responsibility for the committee, would be a “very serious and significant” declaration to make.

The PAC contends the court’s earlier finding means it can examine only the “content” of what was said at the PAC hearings to ascertain whether its actions went beyond the scope of the invitation to Ms Kerins to appear before it, he said.

The court cannot analyse the utterances in terms of their “tone and motivation” or the overall atmosphere of the PAC hearings as that would have a “chilling effect” on how the Oireachtas conducts its business, he said.

Arising from the proceedings by Ms Kerins and a separate case by businessman Denis O’Brien, steps have been taken by the Oireachtas itself to address concerns about the conduct of committees, he added.

Maurice Collins SC, for the State, said the court should not take the “very serious, significant and unprecedented” next step of making a declaration of unlawful action by the PAC.

The court has already laid down a “significant marker” for the conduct of parliamentary committees and does not need to go further, he argued.

The court should now set “clear guidelines” so the Houses of the Oireachtas will know exactly where the line is beyond which actions of parliamentary committees are justiciable, he urged.

In arguments for Ms Kerins, John Rogers SC argued there was “material departure” from the invitation to attend before the PAC and the court should so find.

Ms Kerins had been invited to discuss limited matters, including remuneration, but it was “open season” on her when she got there, he said.

At the second PAC hearing, which she did not attend due to illness, she was not afforded the basic rights of an examinee, he said.

The issue is how the court interprets the “collective” actions of the PAC, counsel argued. The court should declare the actions in their accumulation amounted to an unlawful exercise of the remit give to the PAC by the Dáil which had adverse effects on the reputation of Ms Kerins.

Counsel also argued the PAC chairman John McGuinness was not doing its job in terms of the conduct of both hearings.

Ms Kerins tried to make clear from the outset of the February 27th hearing the limits of what she was there to discuss but the hearing was “controversial from the start”, he said. She was treated to commentary about her private communications with people completely unrelated to Rehab, there was a critique of her salary and her behaviour and discussion of internal commercial dealings.

After that hearing, Ms Kerins was regrettably hospitalised for a period and former Rehab CEO Frank Flannery had resigned on March 10th from the Rehab board and its subsidiaries, he said.

Ms Kerins’ own resignation on April 2nd 2014 was described by Independent TD Shane Ross on RTÉ’s Morning Ireland as an “achievement” of the PAC, he added.

All of this should be seen against a background of publicly expressed concerns in early 2014 about the PAC acting outside its remit, he said.