Cost of Garda reforms will mean 200 fewer recruits in 2019 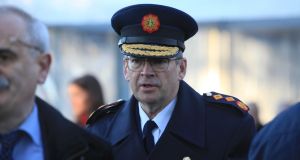 Garda Commissioner Drew Harris has assured the Department of Justice the reduction in recruitment for 2019 will not affect the 2021 target. Photograph: Garrett White/Collins

Garda Commissioner Drew Harris plans to recruit 200 fewer gardaí than planned next year and to use the money instead to fund reforms of the force.

In October’s budget the Garda received an extra €60 million in funding to go towards the recruitment of 800 extra gardaí.

Mr Harris has assured the Department of Justice the reduction in recruitment for 2019 will not affect the 2021 target.

There are currently about 14,000 sworn members of the force, an increase of about 1,000 in the five years since recruitment was restarted following its pause during the recession.

On Thursday a Garda spokesman confirmed 600 instead of 800 will be recruited “in order to further increase Garda visibility while remaining within the Garda budget for 2019”.

The 600 newly recruited members will be taken in to the Garda College in Templemore in three classes of 200, beginning in April 2019.

Due to resignations and retirements, about 400 new recruits are required every year simply to maintain the current numbers.

Mr Harris also plans to bring an additional 500 gardaí onto frontline duty next year by hiring 600 civilians to take over support roles. Last year, additional recruitment of civilian staff for administrative positions allowed the transfer of 200 gardaí to frontline policing, a spokesman said.

The reduction in planned recruitment represents Mr Harris’s first major departure from policies set in place before his appointment in September. As commissioner and accounting officer for the force, he has a large amount of discretion to use the funding as he sees fit.

It is understood he plans to divert some of the €60 million to implementing reforms in the force and to fund the establishment of additional units of the National Protective Services Bureau, which deals with domestic violence and sex crime.