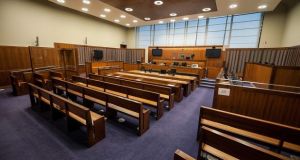 The deceased’s blood and urine were tested for drugs, revealing that he had taken benzodiazepine, methadone, alcohol and cocaine in the hours before his death, court told. Photograph: Collins

After a fight with his lover’s boyfriend, a Dublin man died from a single stab wound to the heart, a pathologist has told a murder trial.

Deputy State Pathologist Dr Linda Mulligan told the trial of Keith Connorton that the deceased suffered three other stab wounds which could have contributed to his death and about 40 scratches and bruises.

Mr Connorton (40) of Deerpark Avenue, Tallaght has pleaded not guilty to the murder of Graham McKeever (32) at the accused man’s home on February 18th, 2017. He is on trial at the Central Criminal Court.

Dr Mulligan told prosecution counsel Brendan Grehan SC that she attended the scene and found the deceased in the living area of the apartment, lying on his back on the ground with two obvious stab wounds to his chest.

He was wearing only boxer shorts and socks and his body and the area around him was heavily blood-stained.

On the floor about two metres from his body was a knife with a serrated blade.

The fatal wound entered the front of the left side of the chest between the second and third ribs and tracked to a depth of 11cm. It penetrated the two chambers of the right side of the heart causing damage to the ventricular wall and bleeding around the heart and into the lungs. This wound, she said, and the bleeding that resulted from it, was the cause of death.

A second wound to the chest went to a depth of four centimetres but did not penetrate past the ribs. Another stab wound near the armpit and a fourth to the back did not penetrate the chest cavity. Although those wounds were not fatal she said they would have caused blood loss and may have contributed to death.

The fatal wound, she said, was not survivable and although death would not have been immediate, it would have been rapid, within minutes.

She found bruises and scratches on his head, neck, arms legs and torso.

The deceased’s blood and urine were tested for drugs, revealing that he had taken benzodiazepine, methadone, alcohol and cocaine in the hours before his death.

The fatal injury was consistent with the use of a tapering knife, while two injuries on his back may have been caused by a serrated knife. Ten injuries were consistent with scratches from the tip of a knife. The trial continues on Friday in front of Justice Tony Hunt and a jury of nine men and three women.