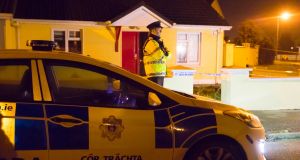 A Garda stands watch at the house where a man died after an assault at Coolfin Meadows, Portlaw, Co Waterford. Photograph: Patrick Browne

A man in his 50s who was fatally assaulted in his house on Thursday afternoon in Portlaw, Co Waterford, is understood to have been struck with an implement which may have been an axe.

The victim of the assault who was named named locally as John “Cha Cha” Lowe lived alone in the Coolfinn Meadows housing estate on the Waterford city side of Portlaw.

It is understood that a row broke out between the man in his 50s and a man who was staying temporarily with him at the time, which led to the victim being fatally assaulted.

Gardaí­ and ambulance services were called to the scene in the mainly local authority estate at about 2.45pm and the victim was rushed to University Hospital Waterford by ambulance, but pronounced dead shortly after arrival.

A man in his 20s was arrested at the scene of the assault and taken to Tramore garda station, where he was being held under section 4 of the Criminal Justice Act.

The arrested man is understood to be from the Waterford area and from a well-known and highly-respected family.

The dead man is a native of Portlaw and lived for a number of years in England before returning to the Co Waterford town some years ago. He was single.

The area around his house was cordoned off by gardaí­ to allow a forensic examination to be carried out by members of the Garda Technical Bureau.

A post-mortem examination is due to be performed on the body of the deceased man, possibly on Friday.

The local coroner was informed of the death by investigating gardaí.

“There’s just complete and utter shock in the area,” local Sinn Féin councillor Declan Clune said on Thursday evening, adding that he didn’t know the victim very well but knew the family of the man detained by gardaí­. “They are absolute salt of the earth people.”

Coolfinn Meadows is located close to the Clodiagh river which flows through Portlaw, and also close to one of the boundaries of the Curraghmore House estate, owned by Lord Waterford.