A year after her murder, Rose Hanrahan’s neighbours still live in fear

The Limerick pensioner’s killer is still at large, but Garda believes he has fled the country 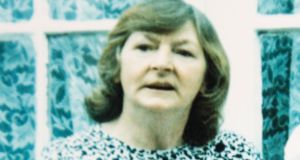 Rose Hanrahan was found strangled at her home in New Road, Thomondgate, Limerick on December 15th, 2017 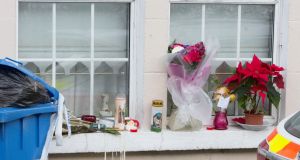 Flowers and candles on the window of Rosie Hanrahan’s home in Thomandgate. Photograph Liam Burke/Press 22

One year ago, pensioner Rose Hanrahan was found strangled to death in her home in Thomondgate in the heart of Limerick City. A year on, the community remains in grief.

The Garda has believed from the beginning that the chief suspect, an Eastern European, immediately fled abroad. However, her friends and neighbours still live in fear.

The 78-year-old was discovered by relatives in her bungalow at New Road, Thomondgate, in Limerick, on December 15th, 2017.

She was killed, gardaí believe, during a botched attempted robbery, when her killer broke in after following her home from a shopping trip.

Mary Duffy, aged 73 and one of Rose’s closest friends and neighbours, sums up the mood: “I don’t open the door to anyone now.”

The fear that the killer has not gone away still lingers. “There are different rumours,” says Duffy. “It does make you more careful, I would be more careful.”

Since the brutal killing, Duffy no longer carries a handbag when she is out. Today, her “worst nightmare” is to return home to find “someone in my house”.

“It’s still hard to believe . . . You think you’re safe in your own home,” she adds. “It’s terrible to say that nobody has been caught for her murder.

“It’s frightening, because [the elderly] are so trusting . . . You don’t know who is around,” she tells The Irish Times.

Many in Thomondgate share her fear. While most accept that the Garda threw adequate resources into the murder investigation, some, including Duffy, call for street patrols to help allay fears. “I don’t see any garda around,” she says.

Ger Kiely, who grew up “in safer times” alongside Rose in Killeely, said: “You’d never see a garda. The only time you see a garda is when they’re after someone . . . when the sirens are going.

“A lot of the women, I’d say, are frightened, and I wouldn’t blame them,” says the 66-year-old widower, who lives with his son and his daughter-in-law, but is “wary to open the door to anyone” if he is home alone.

“In this day and age [people would] kill you for twenty euros . . . you would be frightened. Rose was “an easy target . . . we are all easy targets.We’re wary the whole time now, a lot more wary since the murder.”

The open sore left in the community from the killing will not heal until the murderer is caught, says Pat Murphy, who lives a few doors from Rose Hanrahan’s house.

“To be honest with you the mood isn’t great,” he says. “There’s obviously a sense of loss, and the fact that there’s been no closure on it. It’s still fresh in people’s minds.”

Murphy, aged in his mid-60s, is busy organising a candlelit prayer vigil for his neighbour and friend, which is to take place outside her home on Friday evening.

He is glad of the distraction, and to show Rose’s family that her neighbours have not forgotten her. A memorial Mass will take place in St Munchin’s Church on Saturday.

“It’s the least we can do for the family, and for Rose. It’s a bit of solace, and it reminds us that we are not forgetting about it. There’s a terrible sense of loss in the community,” he says.

“People still live in fear, especially at this time of year . . . people living alone and isolated. They still dread a knock on the door at night-time.”

Murphy, too, is concerned about the visibility of the Garda in Thomondgate, particularly since its focus has moved internationally.

“You’re depending on law and order and policing to allay fears but . . . it’s like we haven’t moved on. A year on, it’s still the same. The scar is still there.”

Gardaí are satisfied the killer is not local. However, senior gardaí have not commented on rumours that the killer fled quickly by ferry to France, and then onto Eastern Europe.

The Hanrahan family have kept up to date on the progress of the investigation, which now involves Interpol and Europol, Garda sources say.

In St Munchin’s Community Centre, where 87-year-old John Collins is a regular visitor, 180 meals are prepared daily and served to the elderly and vulnerable.

Despite his age, the octogenarian jogs regularly to “stay fit”, and is prepared to defend himself. “When I go out at night-time, I always bring a stick, wrapped up in the bike, just in case.

Linda Ledger, the centre’s general manager, says people are still “scared” a year on. “The loneliest time for the elderly is when they have to go home. They like to be home before it gets dark . . . but it is very scary,” she says.

Two community gardaí offer advice to the centre’s patrons about “who not to leave into your house; who to ring . . . all the basic things”, he says. “They’re very accessible and very accommodating.”

Next Monday, St Munchin’s will deliver 190 Christmas dinners to the homes of local elderly – an opportunity, says Ledger, to “check in and show a friendly face”.

Responding to local concerns, the Garda pledged that Thomondgate will be regularly patrolled over Christmas while actions with other agencies to link with local elderly are under way.

“Our community gardaí are always available to meet members of the public who wish to discuss any matters of public safety,” said a spokesman.

Looking to Christmas, Mary Duffy says she hopes the killer is caught quickly to let her friend rest in peace. “I hope it’s not another year before somebody is got for her.”