Nearly €46,000 seized during routine profiling of vehicles at Rosslare Europort

Four people, originally from Romania, questioned in relation to seizure 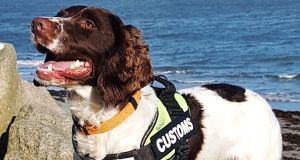 Nearly €46,000 believed to be the proceeds of criminal activity was seized this week in Rosslare after a vehicle was stopped while boarding a ferry to Cherbourg in France.

Detector dog Flynn assisted revenue officers during a routine profiling session in identifying a vehicle carrying €45,635 at Rosslare Europort on Tuesday. Four people, originally from Romania, were questioned in relation to the seizure and investigations are ongoing.

Revenue officers were granted a three-month cash detention order on the money seized by Judge Miriam Walsh at Gorey District Court on Thursday.

A statement from the Revenue office said the cash is suspected to be the proceeds of, or intended for use in, criminal activity and was detained in accordance with proceeds of crime legislation.

Business or members of the public with any information which could help tin his operation are advised to contact Revenue in confidence on 1800 295 295.