Customs officers seize over €400,000 in cash in Rosslare Europort search 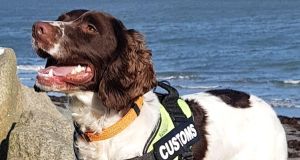 Customs officers have found over €400,000 in cash in one consignment during searches on a passenger’s vehicle as it was passing through Rosslare Europort, Co Wexford.

Some €427,500 was discovered hidden in a UK-registered vehicle as the driving was about to board the sailing to Bilbao, Spain.

The cash was seized on suspicion it was the proceeds of crime or was set to be used in the commission of crimes.

A suspect in his 30s was driving the vehicle and he was questioned about the find, with the investigation into the money and the Polish suspect ongoing. The vehicle was selected for searching following routine profiling and with the aid of detector dog Flynn.

The find is the latest very large cash or drugs haul seized in the State since the start of the year, with multimillion seizures of both having been made during that period.

Security sources believe the size of the hauls underlines how robust organised crime has been during the Covid-19 pandemic period. While the background of the latest consignment of cash seized was still under investigation, some of the other major seizures were linked to the drugs trade, which has proven resilient despite the tough economic conditions due to the pandemic.

Revenue’s Customs officers and gardaí have the power to seize money if they suspect it is the proceeds of crime or was being used for criminal purposes. Once they make a seizure they must go before the courts and apply to retain the money pending further investigations.