Revenue seizures of illicit drugs surge in first half of year 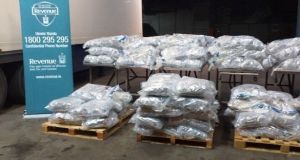 The value of illicit drugs seized in the first half of the year by Revenue’s Customs officers has surged, driven by the cocaine and cannabis markets.

Senior Garda officers believe the increase in smuggling into the Republic, usually in freight via ports, is further evidence of the rebounding drugs trade and the fact new criminal gangs were now coming to the fore as the Kinahan cartel had been under intense pressure.

Data obtained by The Irish Times shows illicit drugs valued at €20 million – including cannabis herb and resin, cocaine, heroin, amphetamines and ecstasy – were seized in the first half of this year compared to €23.6 million in all of last year.

News of the significant increase in the value of drugs seized this year by customs officers comes after the latest crime figures from the Garda showed drug dealing has significantly increased during the lockdown.

The number of cases of “possession of drugs for sale or supply” recorded by the Garda increased by 25 per cent during the second quarter of the year. Garda sources say the increase in the number of drug crimes recorded was driven by the fact streets in towns and cities were deserted during the strict lockdown, which meant street drug dealing was more obvious and easier to detect.

They point out tens of thousands of Garda checkpoints were also erected as part of the pandemic response, saying drugs were found in many stopped vehicles.

However, the same sources believe the surge in smuggling detections likely reflected the fact that the rebounding of the drugs trade witnessed in recent years as the economy recovered had continued and even accelerated despite Covid-19.

“The Kinahan cartel was so big in Ireland for years, but now they are under pressure and a lot of them are in prison, and that means other gangs are growing stronger and younger people are now getting themselves established,” said one Garda source working in the investigation of gangland crime.

Another source said the fact the Criminal Assets Bureau was now frequently carrying out raids in regional towns and villages, and often finding evidence of significant wealth was proof that drugs gangs were now very established across the Republic.

The value of cannabis seized in the first six months of this year, at €11.9 million, is already higher than last year’s €10 million in seizures. The number of times cannabis was seized has also surged this year: 2,104 cases in the six months to the end of June compared to 2,284 seizures in all of last year.

Some €5.9 million worth of cocaine was found by customs officers in the first half of this year compared to €4.56 million in all of last year.

The new drug-smuggling trends emerged after Garda crime data showed the number of drugs offences recorded in the Republic increased in the first half of the year despite most other crime types plummeting due to the impact of the Covid-19 lockdown.

Aside from the drugs trade, other forms of smuggling, including that relating to cigarettes, tobacco and alcohol, also appear to be booming as criminals try to avoid duties and taxes payable when such goods are imported. Last year the combined value of cigarettes, tobacco and alcohol seized was €13.9 million, though that surged to €29.5 million in the first six months of this year.