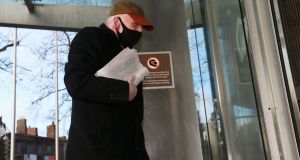 A former teacher and rugby coach at Terenure College has been sentenced to eight years in prison over the abuse of 23 schoolboys.

On Thursday, John McClean (76) of Casimir Avenue, Harold’s Cross, Dublin, was sentenced to 11 years, with three suspended, after pleading guilty to charges of indecently assaulting 23 pupils between 1973 and 1990.

McClean was an English teacher at the south Dublin fee-paying school from 1966 to 1996, as well as a rugby coach.

He was involved in costume fittings for school plays, which he used as an opportunity to sexually abuse multiple boys.

Following one student reporting that McClean had touched his genitals he was removed from his role fitting costumes in 1979.

However, in the early 1980s he was given his own office as first-year “form master”, where he would continue to physically and sexually abuse students.

After admitting to one of the allegations in 1996 he was granted a three-year career break and became a rugby coach at UCD.

Some of the instances of the abuse involved “pre-planning,” while others were opportunistic, but “all involved significant abuse of power,” she said.

McClean had “acted with impunity” for 17 years, and exploited his position as a teacher and sports coach in an “egregious breach of trust”, the judge said.

The high number of victims was taken into account in the sentence, and the accused had “cast his net wide”, she said.

Through the fear of pupils being dropped from the school rugby team, McClean had been able to “exert control” over some of his victims after abusing them, in a “most manipulative manner”, she said.

As the sentence was handed down, McClean sat in the courtroom looking down, often with his head in his hands.

At a previous hearing Sean Guerin SC, defending, said his client has instructed him to give an “unreserved and unconditional apology”. He said his client was “ashamed” of what he did and that no victim bares any responsibility for any of the offences or any of the harm done by him.

H said his client wanted to publicly acknowledge that by his action he has done great harm to Terenure College, to the wider community and to the Carmelite Order, for which he was sorry.

McClean had denied all the offences when interviewed by gardaí and trial dates had been fixed, before he finally pleaded guilty last November.

Last week the court heard a number of victim-impact statements from past pupils who had been abused by McClean. One victim described McClean as “evil personified”, while another victim said the abuse was the “cold calculated actions of an odious man”.

Speaking on the steps of the court after the sentence was passed, Damien Hetherington (59), one of the victims in the case, said he supposed he felt closure, “but it has taken me forty-seven years”.

“The dogs on the street were barking about this particular individual for the thirty years he was there, but he was still left there,” Mr Hetherington said.

Referring to how McClean was conducting himself in court, Mr Hetherington said “he couldn’t look at any of us in the eye, he had his head down all the time. Anyway he is gone now to where he should have been 25 years ago.”

“I would never have thought 47 years later I would be standing here,” he said.

“But I would encourage any more victims to please come forward. It is never too late. This has been a scar on this country for god knows how long.

“Come forward and get it done, you will be surprised how good you feel,” he said.

In a statement following the sentencing, Terenure College said its principal Fr Éanna Ó hÓbáin and the provincial of the Carmelite Order in Ireland Fr Michael Troy “acknowledge the courage of the men who gave harrowing accounts to the court of the abuse they suffered.

“Fr Ó hÓbáin and Fr Troy said that on behalf of Terenure College and the Carmelite Order they are deeply sorry and apologise unreservedly to the former pupils who were abused as young students.

“We understand that words of apology are never adequate when people have experienced so much pain and suffering over many years. These men were entrusted to our care when starting out in life - young boys full of hope, promise and joy. They had that hope and promise cruelly taken from them as a result of the sexual abuse perpetrated upon them by John McClean.

“Terenure College and the Carmelite Order failed in their duty to protect them and for this we are truly sorry.

“We wish to also acknowledge the suffering of the families of those who were abused as they learned of the gross violation of their son, brother, father, partner or husband while at our school.

“Terenure College and the Carmelite Order are wholly committed to providing effective and meaningful support to former pupils who are victims and survivors of abuse. We are available to anyone who wishes to contact us through the school or the Carmelite safeguarding office. They will have our full support.”

The statement added Terenure College and the Carmelite Order, which runs the school, fully co-operate with the Garda and all relevant authorities in Child Protection matters.