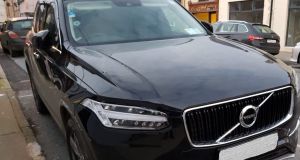 Cab also seized a new Volvo XC90 as it was suspected the vehicle represents the proceeds of crime.

Members of an international crime gang based in Ireland have been targeted in raids by the Criminal Assets Bureau (Cab) after an investigation found more than €4 million had been transferred into their bank accounts in the Republic.

In co-ordinated searches early on Wednesday morning in Tipperary and Kilkenny a large Garda team, led by Cab’s officers and backed up by the armed Emergency Response Unit (ERU), moved in and searched several properties.

Four properties, including the suspects’ homes and business premises, were visited. Financial documents were taken for analysis as the investigation into the gang’s assets and crimes continues, with a particular emphasis on money laundering.

Cab also seized a new Volvo XC90 as it was suspected the vehicle represents the proceeds of crime.

The gang members are from south Leinster and Munster but have been active in continental Europe and have extensive contacts there.

“Over the course of this investigation assistance was sought from, and was provided by, Europol,” said Cab.

“This morning’s operation is a significant development in an on-going Cab investigation targeting an organised crime gang involved in large scale money laundering in the Republic of Ireland and Europe.”

As well as member of Cab and the armed ERU, Wednesday’s searches also involved the Garda Dog Unit and gardaí from the Tipperary and Kilkenny divisions.