‘I have full respect for journalism. I have worked with journalists and I value their role’ 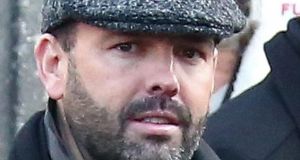 Daniel Kinahan has denied ever making threats to a journalist, adding he values the role the media plays and believes journalists should be free to do their work.

Mr Kinahan made his remarks in a statement just days after it emerged the PSNI had informed the BBC Panorama crew, specifically one journalist, there was an unspecified threat against them. This followed an investigation by Panorama into Mr Kinahan last week, though the information about the threat did not name Daniel Kinahan or relate to him.

While the programme revealed little new about the Dubliner or his activities, it broadcast the allegations about him - that he leads the Kinahan drugs cartel while also having a powerful position in world boxing - to a much wider audience than reports in the Irish media.

The broadcast of the programme came seven months after British heavyweight boxer Tyson Fury credited Mr Kinahan with putting in place for him his fight deal with Anthony Joshua, which has been referred to as the biggest in British boxing history.

There have been reports since then that Mr Kinahan is no longer advising Fury or working on the arrangements for the Fury versus Joshua fights later this year.

In a statement broadcast on Monday by Talksport in the UK, Mr Kinahan said he had tried his best “to ignore the allegations that are constantly made about me” as he dedicated himself to boxing for the past 15 years. He also confirmed he remained centrally involved in boxing.

Mr Kinahan also said several times in his statement he had no convictions anywhere in the world and complained the media had constantly connected him to criminality he had no involvement in.

“Why is there only a trial by media and not a criminal trial? There is a simple answer to this. That answer is because there is no evidence. It’s because it is not true,” he added.

“I have chosen to dedicate my life to my family and my work. I do so every day in good and honest faith. I will continue to always choose love and choose God in my future as I do in my present.

“I have started from the bottom and worked my way up. I am proud to say today that I have helped organise over a dozen major world title fights. I continue to be involved in planning multiple record-breaking and exciting world title fights,” he said.

“I’m Irish. I was born and raised in Dublin. In a deprived area with serious levels of poverty, of crime, of under investment. People like me, from there, aren’t expected to do anything with their lives other than serve the middle and upper classes. Boxing is a working class sport for which I’ve had a lifelong love and passion.”

He added he did not like how boxing had been run and so during his work with boxers he wanted to ensure they were financially secure and healthy when they left the sport but he was now being targeted in a “campaign” because he was so successful.

“Last week it was inferred that I had threatened a reporter. I have full respect for journalism. I have worked with journalists and I value their role,” he said.

“Journalists should always be free to do their job, free from any threat or harassment. I have never threatened a reporter or journalist or asked anyone to do that for me. I never have and I never would.”

He said he had “not been on the receiving end of fair and credible journalism, especially in the UK and Ireland”, claiming the Panorama programme was the latest example of the “unsubstantiated allegations” against him.

Separately, Irish actor Paul Mescal has distanced himself from MTK sports after learning about Mr Kinahan’s connection to the company.

MTK Global, originally founded by Mr Kinahan in Spain, posted on social media on Sunday that Mr Mescal had trained in its Sydney gym on his 25th birthday. It also posted a video of the Normal People star sparring in the ring.

On Monday, Mr Mescal’s representatives released a statement saying he is in Australia for the production of a feature film which required him to undergo boxing training.

It said the production was not aware of the connection between MTK Sydney “and the man named by Irish courts as a crime boss”.

“Paul is no longer training at the facility,” the statement, which was released to RTE Radio One, said.

In 2018, a High Court judge stated Mr Kinahan, who has no convictions, controlled an organisation involved in drug and weapons smuggling on a global scale.