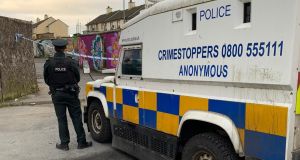 Two men were injured during a double shooting in Derry at the weekend, in what the Police Service of Northern Ireland (PSNI) believe were attacks carried out by “dissident republicans”.

At 6:35pm on Saturday, two men were found with gunshot wounds to their legs in an alleyway in Rinmore Drive, in the vicinity of Creggan shops.

The Northern Ireland Ambulance Service and police attended the scene from where both men were taken to hospital. Both victims remain in hospital in a serious condition.

Detectives are appealing for information and witnesses.

Det Insp Michelle Boyd said officers are “continuing with their enquiries into these savage attacks, which we believe were carried out by dissident republicans”.

“The fact the victims were shot in a residential area at a time when people would have been out and about shows just how reckless those responsible are, and how they have no regard whatsoever for life,” she said.

“[Saturday] night’s double shooting brings the number of shootings in our city to four since the start of the year. They are simply unacceptable and there can never be any justification for them.”

Det Insp Boyd said carrying out attacks like this during a pandemic is “particularly repugnant”.

“We know the majority of people are working hard to keep their community safe and to protect the NHS, yet these violent criminals are endangering lives and increasing pressures on our emergency services and frontline workers,” she said.

“I am appealing to the public to help us remove these violent criminals from our community by bringing any information they have to us. In particular, we want to hear from anyone who was in the area at around 6:30pm and saw what happened to call our detectives at Strand Road on 101, quoting reference number 1559 of 06/02/21.”