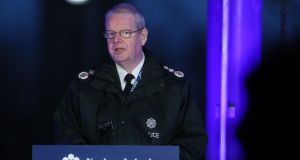 The North’s chief constable has met representatives of Northern Ireland’s main political parties after a controversial operation that saw a Troubles survivor arrested at a memorial event for victims of a loyalist atrocity.

A meeting between Sinn Féin and Simon Byrne was described as “forthright” and “frank”.

Sinn Féin Deputy First Minister Michelle O’Neill said she told him of “unprecedented anger” over the arrest of Mark Sykes, a victim of the Sean Graham bookmakers shootings. He was subsequently released.

It came days after police officers were seen standing by as dozens of masked loyalists walked around an area of east Belfast.

“I left the chief constable in no doubt that the events of recent days are a watershed moment for policing and public confidence in policing,” Ms O’Neill said.

But Sinn Féin’s criticism was dismissed by the DUP.

First Minister Arlene Foster, who also met Mr Byrne, said: “Given the antics of Sinn Féin at the Storey funeral and their disregard for Covid-19 rules, their criticism of the police rings utterly hollow.”

Mrs Foster expressed concern at Mr Byrne’s public apology issued on Saturday evening along with the suspension of an officer, and described events as having “all the hallmarks of trial by social media”.

She said decisions about the matter should have been made at the completion of the Northern Ireland Police Ombudsman’s investigation.

“It’s been a tough week, but I’m not the first chief constable here that’s had to suffer or be accountable...for criticism over the last 50 years.” He expressed concern police were being used as a shock absorber in intensifying political clashes.

“We have been bashed frankly by recent events and it just seems sometimes that we can’t seem to win,” he said.

The police chief again made clear he had no intention of resigning.

“Actually quitting is the easy thing and whatever next week looks like, frankly, the in-tray is the same and I’m just determined to carry on with the support of my team to actually deliver what we set out to do.”

Last Friday police moved to break up the memorial event in the Ormeau Road area of Belfast.

Mr Sykes, who was shot several times in the 1992 outrage, was handcuffed and arrested in chaotic exchanges captured on social media.

The conduct of the two sanctioned officers is being examined by the independent watchdog, the NI Police Ombudsman.

The episode followed just days after police officers did not arrest anyone when they encountered a large gathering of masked loyalists staging an apparent ‘show of strength’ in east Belfast.

Sinn Féin has highlighted the two incidents as evidence of what it describes as two-tier policing.

The incidents came in a week when police were also dealing with increasing tensions over Brexit that led to the withdrawal of staff conducting trade checks at Larne and Belfast ports amid safety concerns.

“I think this has been a unique week, I’ve never known anything like it in my professional police experience,” Mr Byrne told PA.