Closure of courts sees income stream 'turned off' for many barristers 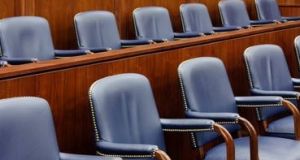 “God knows when jury trials will be back. I suspect they won’t be until October at the earliest. That will be very tough on people.” Photograph: Getty Images

The closure of the courts has “turned off” the income stream of many of the State’s barristers, while for solicitors the stalling of the property market and the prospect of another economic downturn means Covid-19 has upended their businesses.

“Colleagues are telling me that they’re closing some sales, but I’m finding that we’re not finishing anything at the moment,” says Patricia Drumgoole, principal of a small solicitors’ practice in Drumcondra, Dublin.

Conveyancing is an important part of the firm where she works alongside one other part-time solicitor.

Asked for examples of how the lockdown has affected her, she cites a client in an executor’s sale who felt she could not make the 10-mile journey to clear out the house. “She felt she couldn’t because it was a non-essential journey in her view. Also, people are having trouble getting removal people. That’s a real problem with sales.”

Colleagues have told her of sales being stopped at the last moment as banks check whether a person is still working, before releasing the agreed loan.

Her practice was set up in 2004, and survived the last recession. “Things improved the, after the downturn, but now income is significantly reduced, and I suspect it will be at least for the rest of the year. Goodness knows what will happen after that.”

The cessation of so many family law hearings is the most difficult issue from the point of view of clients.

“If you have an access [to a child] or a maintenance payment problem and you go to court, the date you are given for a hearing is for November. That is very difficult for people.

“The one thing we are finishing is wills. We are not run off our feet making wills, but we definitely have done a lot more over the past six weeks than we would normally do.”

John Moylan, of Richard Moylan & Co, Mallow, Co Cork, began working in his father’s practice when just 16. He qualified as a solicitor in 1978, and works in the practice along with two other solicitors and four staff.

Since the Covid lockdown began he has been interviewing clients in the office car park for social distancing reasons. “I never thought that the car park would have a beneficial impact in terms of interviewing people. It’s really handy.”

Asked how much new business is coming into the firm, he answered: “Practically none at all. Everybody’s gone into a cocoon.”

One area that has remained active is the making of wills. “I made a will yesterday. [He and a colleague] went out to a lady, drove in her entrance, in two separate cars. She opened the window, and my colleague went up and dealt with her at the window She read the will and was happy with it. She was a very elderly lady. She signed it. I stood back about 10 feet, and then I signed it. That’s how it worked there. Out the window. People are very adaptable.”

The impact of Covid-19 is being felt across the solicitors ’profession, according to Ken Murphy, director general of the Law Society.

“I would say it is very deep for all, and will be devastating for some. But we don’t know as yet the depth and duration of the crisis, so it is impossible to predict what the ultimate effect will be.”

A senior partner with one of Ireland’s largest law firms, speaking off the record, said the initial stages of the crisis has produced a lot of new work.

“It is very different from the financial crisis. This time it is a very sudden shock and that gives rise to a lot of legal business.”

Legal advice to do with crisis management, and businesses not being able to fulfil contract obligations are among the issues creating work, she said.

“There is a lot of remote arbitrations going on, a lot of mediation of matters that are not going to hearing in court. Some very interesting stuff.

“The issue is going to be, come June or July, what is the level of work then. Will the crisis still be going on in three months, or six, or nine?”

There will be lots of work in the coming period in certain areas, she believes, but the jobs market for solicitors has now altered completely.

“Six months ago holding on to good staff was really challenging. I think that has changed, and the level of jobs available is going to drop off. Young people are really going to have to stand out and show that they are top-end if they want to get into the top firms now.”

In her view solicitors are doing better than barristers, who have been “hit very hard” by the near-closure of the courts.

“The reality is that all non-urgent court business has ceased, and the capacity of barristers to earn a living has, for the moment, in large measure ceased,” according to Mícheál P O’Higgins SC, chairman of the Bar Council.

There are no personal injuries cases taking place, no family law cases apart from some urgent categories, no neighbour disputes, contract disputes, no judicial reviews, he said.

“Even custody cases are not continuing, criminal trials where a person is in custody are not even listed to be heard. For many barristers their income stream has just been turned off.”

The vast majority of barristers are members of the Bar of Ireland, which provides a range of services to its approximately 2,200 members in return for annual fees that range from €1,500 for someone starting out to €8,515 for a senior counsel.

“When the crisis kicked in and the courts shut down, we began to be inundated with members saying they wanted to cease their membership,” said Ciara Murphy, chief executive of the Bar.

“I suppose the analogy would be like a run on the banks. So we had to get ahead of it because people were panicking at the beginning, understandably, and we said, hold back, and give us a bit of time, to see if we could help people financially.”

Members have now been given a 25 per cent credit on their fees, in recognition of the fact that the courts are essentially closed.

The Bar owns substantial properties on Church Street and Bow Street in Dublin, close to the Four Courts, where it rents office space to its members. A two-month rent freeze has been agreed, again to help members deal with the financial implications of Covid-19.

Plans to temporarily lay off approximately half of its 76 staff, and put a lot of the remaining staff on significantly reduced hours, were shelved after the Bar received help from the Government’s wage support scheme. “But those options are still on the table, depending on what happens,” said Murphy.

“More than 90 per cent of my work is based in the Criminal Courts of Justice,” said Diana Stuart BL. “Instead of making daily appearances, I have only been in court on a handful of occasions since March 13th.”

Her income, in common with that of so many of her colleagues, is greatly reduced.“All barristers are concerned about what the future holds in terms of career and income.”

Stuart has been involved in a number of virtual court hearings, taking part remotely from the box room of her home, a room which, she said, she now regrets having painted bright orange. “It’s not a work scenario I’d ever imagined happening.”

Even before the Covid-19 crisis there was a long wait for criminal trials to get ahead.

“It could take up to two years to get back on track. During that time defendants will be left on bail, and prisoners in custody, victims and witnesses will continue to wait to give evidence, all being denied their access to justice.”

Tony McGillicuddy BL would usually have at least one jury trial in his diary every week during the law term.

“God knows when jury trials will be back. I suspect they won’t be until October at the earliest. That will be very tough on people. Jury trials could be one of the last things to resume, like shopping centres and pubs.”

He would like to see the Courts Service outline its plans for how it intends to reopen the courts for business as the Covid restrictions ease.

One of suggestion he makes is that recently retired senior judges be allowed come back to help clear the backlog in the High Court.

Cases could be held in hotels in regional towns and cities, where the necessary social distancing could be accommodated in large function rooms.

Grainne Larkin BL, who works mainly on personal injury litigation in the Circuit Court, has seen most of her cases put back to at least November. At the moment she is doing work at home, mostly processing cases that were already in the system.

“Footfall in the solicitor’s office has fallen dramatically. It’s hard to tell what the impact will be on income as a lot of work may be condensed into the second half of the year.”

Some barristers earned enormous amounts of money and because there is usually a substantial time lag before they get paid for their work the reduction in their income will not manifest itself until later this year and into next year.

Yet for many members of the profession, especially the younger ones, earning a living can be a struggle.

The fact that the crisis is hitting both barristers and solicitors means that solicitors are less likely to engage barristers to do work that they can do themselves, said one barrister, speaking off the record.

He cites as an example the arrangement where barristers can be asked by a busy solicitor to represent an accused in a District Court remand hearing, in return for splitting the €50.39 fee with the solicitor.

“Now that’s drying up. Solicitors are under pressure as well, so they are doing the work themselves.”