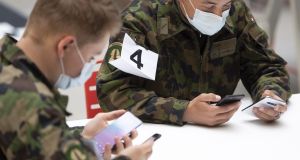 Coronavirus contact-tracing apps planning to use Google and Apple’s technology will not be allowed to access phone-location data, the companies have confirmed.

The two companies have set out a number of policies that will govern the use of its technology, including restricting access to the technology to one official public-health app per country in a bid to build widespread use of the technology, and collecting only a minimum amount of data necessary, and access to location data on the phone is not allowed.

The latter is part of the companies’ pledge to protect user privacy, along with the use of regularly refreshed Bluetooth beacons to identify contacts instead of personal information.

The contact-tracing app currently being developed for the Health Service Executive will use the decentralised model, which sees matches between the Bluetooth beacons carried out on the phone, meaning the data remains more under the control of individual users. That makes it likely that the app, which is being developed by Waterford-based Nearform, will not use the GPS data from phones to gather locations of patients diagnosed with Covid-19. However, that does not prohibit users from entering their location into the app manually if the HSE is seeking to gather general locations from users.

The NHS app being developed for the UK has opted to carry out those matches on a central server instead.

Apple and Google announced last month they would co-operate on a system for notifying people who have been in contact with those who have a positive Covid-19 test in a bid to slow the spread of the virus.

The initial phase, which is currently under way, involves the two companies building an application programming interface into Android and iOS that will let contact-tracing apps talk to each other and work more reliably. It will also minimise the impact on battery life.

The second phase will see that technology built into the underlying operating systems on Apple and Android phones, meaning people will not need to download a separate contact-tracing app. The two companies have pledged to disable the technology when it is no longer needed.

1 Belgium helps Ireland to a Brexit boon
2 Can Grafton Street stop the flood of closures?
3 ‘My rent here is so low it’s a joke’
4 New Powerscourt Springs hotel to open in defiance of virus gloom
5 This charming man: how Paschal Donohoe won the Eurogroup presidency
Real news has value SUBSCRIBE