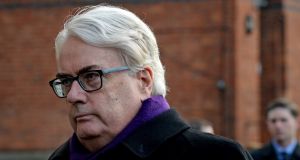 It is understood the attack had no connection to the car being that of Chief Justice Frank Clarke. File photograph: Cyril Byrne/The Irish Times

The garda driver of Chief Justice Frank Clarke was attacked as he sat in his car in Dublin on Wednesday morning.

It is understood the driver was approached by a man who knocked on the window and then assaulted him.

The driver is one of a number of official garda escorts. He is understood to have sustained only minor injuries and his attacker fled the scene immediately.

Mr Clarke was not in the car at the time of the assault which occurred in Smithfield Square in Dublin’s north inner city at about 9.30am.

Sources have indicated the attack had no connection to the car being that of Mr Justice Clarke.

Gardaí said they were investigating an incident in Smithfield on Wednesday morning in which a man in his 50s was assaulted.

No arrests have been made and anybody with information is asked to contact the Bridewell Garda station at (01) 666 8200, the confidential line on 1800 666 111 or any other station.