Charleton tribunal: Conflict over Taylor’s evidence that texts not used in smear 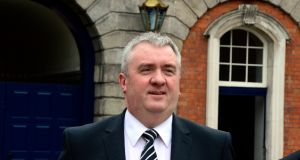 A sharp conflict has emerged between the former head of the Garda Press Office and a number of others who have given evidence and statements to the Charleton Tribunal.

Supt Dave Taylor, in his second day in the witness box, was closely questioned about his evidence that an alleged smear campaign he conducted against Sgt Maurice McCabe did not involve text messages.

John McGuinness of Fianna Fáil, journalist Mick Clifford of the Examiner, and Sgt McCabe have all told the tribunal they were told by Supt Taylor that he had conducted a smear campaign by sending a large number of text messages to journalists and others.

Supt Taylor also proof-read a chapter of a book by Clifford, A Force for Justice: The Maurice McCabe Story, in which it is recounted that, during a meeting in Supt Taylor’s house, Supt Taylor told Sgt McCabe he had sent hundreds of text messages as part of a smear campaign he’d been ordered to conduct against him.

“I didn’t proof-read it in terms of going through it line by line,” Supt Taylor told Diarmuid McGuinness SC, for the tribunal on Tuesday.

“I didn’t notice it.” In the chapter it is recorded that the day after the meeting Sgt McCabe returned to Supt Taylor’s home, and again discussed the text message campaign.

When sending the chapter to Supt Taylor, Clifford had asked Supt Taylor to pay particular attention to the factual accuracy of the chapter.

Sgt McCabe has said in evidence that during the meeting Supt Taylor told him of a smear campaign involving hundreds of text message, and that when he returned the next day, Supt Taylor said it could have involved “thousands” of texts.

Sgt McCabe also said he was told that in some cases the text messages had been composed by Mr Callinan.

Mr McGuinness has told the tribunal that during a meeting in the Skylon Hotel in January 2017, he was told by Supt Taylor that the alleged smear campaign involved text messages to journalists.

The tribunal is examining Supt Taylor’s claim that he was instructed by the then Garda Commissioner Martin Callinan to conduct a smear campaign against Sgt McCabe, and that this was known by the then deputy commissioner, Noirin O’Sullivan.

Both have denied the claim.

The tribunal’s terms of reference also include one that instructs it to examine text communications between Supt Taylor and Mr Callinan and Ms O’Sullivan.

During Sgt McCabe’s second visit to Supt Taylor’s home, Sgt McCabe told him that he was going to make a protected disclosure, which he subsequently did.

At the end of that month, Supt Taylor also made a protected disclosure. In that disclosure Supt Taylor referred to text messages between him and Mr Callinan and Ms O’Sullivan.

However, in evidence Supt Taylor said this was a reference to updates he gave the two officers about mentions of Sgt McCabe in the media, and had nothing to do with any smear campaign.

There was no mention in his September 2016 protected disclosure of Supt Taylor allegedly hearing Mr Callinan, in the wake of a meeting of the Public Accounts Committee in Leinster House, telling Mr McGuinness that Sgt McCabe was a “kiddie fiddler”.

However, Supt Taylor mentioned the claim in a statement he made to the tribunal in March 2017. Asked by Mr McGuinness why he did not mention the alleged comment in his protected disclosure, which went to then minister for justice, Frances Fitzgerald and the then taoiseach, Enda Kenny, Supt Taylor said he put as much information as he had at the time in the disclosure.

It was subsequently “fleshed out”.

Had Mr McGuinness told him about the “kiddie fiddler” comment at that meeting, the witness was asked.

“Absolutely not,” said Supt Taylor. He said the phrase “kiddie fiddler” stuck in his mind when he heard it in Leinster House, as he had not heard it before.

Mr McGuinness has told the tribunal that after the meeting of the PAC, Mr Callinan told him Sgt McCabe “fiddles with kids.”

The tribunal has heard that in 2006 Sgt McCabe was the subject of an historical child sex abuse allegation involving the daughter of a Garda colleague. The Director of Public Prosecutions decided that even if the disputed claim was correct, it would not constitute a crime.

No charges were brought.

Mr Callinan has denied the claims by Mr McGuinness. Supt Taylor is continuing to give evidence.