Seamus Ruddy inquest held 33 years after his murder in France

Family of ‘disappeared’ IRSP man pleads for information on other abductees 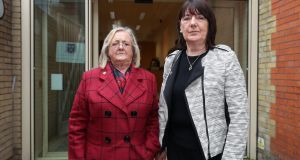 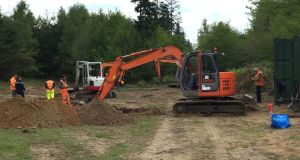 The 2017 search operation in a forest in France for the body of Seamus Ruddy. Photograph: ICLVR/PA

The family of a republican activist murdered by erstwhile colleagues and buried in secret 33 years ago have urged those with information about the remaining “disappeared” to come forward.

Seamus Ruddy from Newry, Co Down, was 32 and working as a teacher in Paris when he was abducted on May 9th, 1985. He was later shot twice in the head by republican paramilitaries.

Seamus had connections to the Irish Republican Socialist Party which had a military wing, the Irish National Liberation Army, which is believed to have shot him dead.

After abduction, Seamus was driven about two hours to Rouen in Normandy, northern France, where he is believed to have been tied to a tree and tortured by the men before his body was buried. His remains were found in May 2017.

Speaking after his inquest at Dublin Coroner’s Court his sister Anne Morgan urged anyone with information to approach authorities.

“There are three other families still waiting for the people who have information about their loved ones. We want them to help bring those three people home.

“We pray they get the same that we have got. We’ve got him home, we’ve been able to bury him and now we’ve had an inquest. We want to thank everyone for helping us,” Morgan said.

Seamus’s brother, Terence Ruddy, was the last family member to speak to him before he disappeared. He was concerned because Seamus said he had made plans to meet three people later that day.

“When he said he was going to meet people I just thought he was telling me that for a reason. I asked him not to go,” Terence said.

Seamus moved from Newry to Dublin in 1979 and studied at Trinity College before moving to Paris in 1983 where he taught English as a foreign language. The following year his then partner, Cecilia Moore, moved to Paris to live with him. In 1985 she returned to Ireland.

“We wrote to each other practically every day,” she told the coroner’s court.

“I was expecting a letter but there was none,” she said.

In June she returned to Paris and made inquiries about his whereabouts. She reported him missing to the police.

“I felt he was dead. I felt if he was alive he’d have contacted me,” she told the inquest. “There were things missing from the flat. Cameras, a box of letters, a tape recorder.”

There was no trace of Seamus until September when a bag of his clothes was recovered from the river Seine.

Following newspaper reports in which the INLA admitted killing Seamus in France, his name was added to the family headstone in Newry.

One previous search had come within 15m of his remains, John Hill, senior investigator with the Independent Commission for the Location of Victims Remains, told the court.

The remains were identified using DNA and repatriated to Ireland on June 6th, 2017.

State Pathologist Prof Marie Cassidy gave the cause of death as gunshot wounds to the head.

The jury of four men and five women returned a verdict of unlawful killing by person or persons unknown.

“Seamus was taken from Paris 33 years ago to the day. This year for the first time in 33 years we were able to attend Cemetery Sunday and pray at the grave where Seamus rests with his mother and father in Newry,” Anne Morgan said.

Three of the 16 disappeared victims are still to be recovered.

The remains of Columba McVeigh (abducted and murdered by the Provisional IRA), Joe Lynskey (a west Belfast man also shot dead by the IRA) and Robert Nairac (a British army officer believed murdered also by the IRA) have yet to be found.