Garda whistleblower inquiry is to present a preliminary report by Wednesday 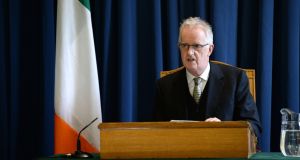 The Charleton tribunal has appointed two investigators to assist it in its work, and is to present a preliminary report to the clerk of the Dáil by no later than Wednesday.

The tribunal, which is investigating an alleged “smear campaign” against Garda whistleblower Sgt Maurice McCabe, has posted two statements on its website, covering mostly technical matters.

In one of the statements, on its procedures, it said it had not yet concluded its preliminary investigations.

It is thought the report that will be submitted to the Dáil will contain little by way of information about any evidence collected to date.

The statement said the two individuals were appointed to assist the tribunal in its functions and were subject to its direction and control.

The tribunal was established in February and is being chaired by Mr Justice Peter Charleton, of the Supreme Court.

As a barrister, Mr Justice Charleton worked for the Morris tribunal, which investigated complaints about members of the Donegal division of An Garda Síochána.

That tribunal appointed two investigators, one a former garda and the other an officer with the Royal Canadian Mounted Police.

The two investigators can be requested by the Charleton tribunal to carry out preliminary investigations.

The investigators can request documents and information, as well as the attendence of people for the purpose of being questioned.

Statements or admissions made to an investigator may not be used as evidence against the person who made them in a criminal trial.

The obstruction or hindrance of an investigator in his or her work is an offence.

It is known that the Charleton tribunal has written to a number of journalists asking them questions about contacts they may have had with senior gardaí and which might be relevant to the terms of reference of the tribunal.

The tribunal is investigating a protected disclosure made by the former head of the Garda Press Office, Supt David Taylor, in which he said he was instructed or directed by former Garda commissioner Martin Callinan and/or then deputy commissioner, now Garda Commissioner, Nóirín O’Sullivan, to brief the media negatively about Mr McCabe.

Ms O’Sullivan has rejected the accusation.