‘We were always happy to see her’: Locals shocked at death of Rita Apine

Woman (29), originally from Latvia, dies after being found at end of stairs in Kilkenny 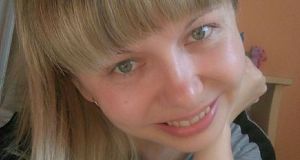 Locals have been left shocked and saddened at the death of a 29-year-old woman who was found at her home with serious injuries on Sunday.

Rita Apine, originally from Latvia, has been remembered as a devoted mother to her young daughter.

Ms Apine moved into a rented house on Bridge Street in Freshford, Co Kilkenny, last December having lived for some time in Kilkenny city before that.

She was found critically injured at the bottom of her stairs at about midday on Sunday and treated outside the house by paramedics, but later died in St Luke’s Hospital in Kilkenny.

A post-mortem examination is being carried out at University Hospital in Waterford by deputy state pathologist Linda Mulligan.

A man in his 30s who was arrested on Sunday afternoon remains in custody in Kilkenny garda station for questioning under section 4 of the Criminal Justice Act.

Ms Apine’s daughter is understood to be almost three years of age and was due to start pre-school in September.

They moved into the private rented house in Freshford late last year, having initially sought housing from Kilkenny County Council, and previously lived at St Teresa’s Terrace in the city.

‘We were always happy to see her’

Ms Apine was not working but was hoping to learn to drive later this year and seek work when her daughter started pre-school.

“She came to my clinic, looking for help for housing and with a social welfare application,” Cllr Andrew McGuinness said yesterday.

“That would have been in June of last year. I don’t know how long she was in Ireland. ”

The 29-year-old mother had just come out of a relationship at the time and was looking for accommodation as a single mother.

Mr McGuinness wrote a reference for Ms Apine for her landlord before she moved to Freshford, “and I had no problem doing that because she was a lovely girl”.

He bumped into Rita about three weeks ago on the street.

“You deal with so many people every day and every week and you don’t always get thanks for it but every time she saw me she stopped me to say ‘thank you’.

“When she came into the office she was always full of energy and positivity and we were always happy to see her.”

Rita always brought her daughter to a nearby public park anytime she called to the councillor’s office, he said.

“It’s so sad, for the child and for the family.”

Tributes were posted online in memory of Rita.

“Her beautiful daughter lost her mother,” one said.

The house where Rita lived in Freshford, on a three-house terrace just off the village’s main square, was yesterday sealed off by gardaí­ while members of the Garda Technical Bureau carried out a forensic examination.

Some bouquets of flowers were left by local people.

Sebastian Madaj, who lives around the corner, said he heard the little girl through a window at about 11am on Sunday, “but she didn’t sound distressed,” and he didn’t realise until Monday morning that there had been a death.

“They never caused any trouble, I never spoke to them,” he said of Rita Apine and her partner.

Gardaí­ made an appeal for anybody who visited the Costcutter shop, just across the road and within sight of the house, or was on Bridge Street between 8am and 1pm on Sunday “and who may have heard or noticed anything out of the ordinary” to contact them.

In Costcutter, a number of women said they had often seen Rita in the area, but didn’t know her to speak to.

Paddy Moriarty, working outside the nearby library, said it was shocking for such an event to happen in Freshford.

“You’d be sorry for the people that’s left behind. I used to meet her when I’d be going for a walk in the morning with the dogs, she would just say ‘hello’ and that would be it.”

His friend Joe Morrissey said he often saw Rita or her partner standing outside the rented house, “having a smoke,” and agreed the tragedy was “very sad, especially a young girl like that”.