Withdrawal of case represents a significant victory for Aviva 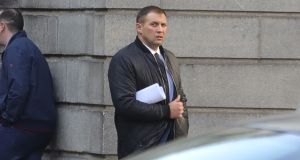 Jessica Mahon, Claire Hickey, David Warren, Mary Brown, Alan Byrne and Le Chang must have seemed like any other customers when they took out car insurance policies in 2013.

Le Chang possibly ought to be Lee Chang but that small error in the recording of his name hardly matters. Because there is every reason to believe that Mr Chang and all the others are fake identities – people who do not in reality exist but are personas invented for an elaborate insurance scam.

Had it worked, the company targeted, Aviva Insurance, would have faced payouts of close to €1 million – with knock-on effects for the industry’s own backstop insurance body, the Motor Insurance Bureau of Ireland (MIBI), and ultimately all honest policy-holders whose premiums have to fund the cost of fraud.

It is not possible to trace the person who has lodged money with pre-paid credit cards, thereby buying the credit to be used

The latest court case linked to the six policies came to a shuddering halt this week inside Court 9 of the High Court in Dublin.

There, plaintiff Saulius Smaleckas, having outlined what he claims happened to him, resulting in injuries requiring medical treatment and loss of earnings, decided over lunch to throw in the towel – but only after being asked the first of many questions that cast deep doubt on his version of events.

Had Smaleckas continued, he would have faced further robust questioning followed by some 20 witnesses whose evidence would have been used to challenge him.

His volte face in withdrawing his claim (and thereby facing legal costs for himself and the MIBI, which was joined in the action) represents a significant victory for Aviva, and is further evidence of a more muscular approach by the industry to what it sees as try-on claims and worse.

The policies saga started in spring 2013 when the first one was taken out. The sixth was taken out in December that year.

In the case of each policy, what were claimed to be accidents happened within 14 days of the policies being activated, one in May, another in June, and then again one in each month from September to December.

When Aviva became suspicious of the claims, the company’s fraud department set up what it called Operation Ghost, the title derived from the term the industry applies to brokers that are in fact fronts for scams.

Each policy had been taken out, either online or over the phone. All six were bought through pre-paid credit cards. It is not possible with such cards to trace the person who has lodged money, thereby buying the credit to be used.

Five of the payments were made by a front-loaded credit card issued by Raphael & Sons, trading as Raphaels Bank of London.

The sixth policy payment was made with a Mastercard debit card. This was issued by Banque Invik of Luxembourg in the name of Hannah Novac. This card was used to buy the policy issued in the name of “Le Chang”.

Today, Banque Invik is known as Catella Bank SA, with offices in Luxembourg and Sweden. Catella is classified by the Bank of Lithuania, that country’s central bank, as an “EU bank operating in the Republic of Lithuania without a branch”.

In the case of each, the only premium payment paid was the first instalment, the one that had to be made when the policy was bought online or over the phone. No further payments were made but, between the first payment being made and the second falling due, a crash had allegedly occurred.

However, in the case of each of the six, when investigated by Aviva, the addresses given proved to be false.

Notable also was the fact that the people in whose names the policies had been taken out – Mahon, Hickey, Warren, Brown, Byrne and Chang – never themselves made any claim even though, according to what had allegedly happened, their vehicles had suffered the sort of significant damage that might be expected to show some physical impact.

None of the crashes was reported to An Garda Síochána and there were no independent witnesses. However, callers purporting to be the policy holders rang their insurers after each “crash”, informing the company of the incident and admitting complete responsibility.

In the case of “Jessica Mahon” and “Claire Hickey”, a UK-based voice analysis expert examining their voice recordings reckoned the inflection and tone suggested the voice belonged to the same person (that person being neither Jessica nor Claire).

“Victims” of the crashes were not shy about coming forward, alleging that the policy holders said to have crashed into them had caused them injury giving rise to a claim against the policy-holder but in reality against the insurance company.

Soon, Aviva faced claims from 26 people and, by the time the company saw connections between the claims, was looking at an estimated potential liability, in legal costs and probable compensation, of over €800,000, of which around €200,000 had already been spent investigating and defending the claims.

That joining of the dots exercise saw Operation Ghost create a family tree-style chart on which lines linked the names of claimants who, by odd co-incidence, seemed to know each other on social media.

The social media links also showed that all were from Lithuania.

Saulius Smaleckas (38) stepped into the witness box on Wednesday morning and swore the oath. A married man with two children, he told Mr Justice David Keane he lived in Cavan and worked for Lidl.

He was also doing a correspondence course in forestry, via an education provider in Lithuania he said, and hoped to work in forestry in Ireland. He also worked as a bouncer for a nightclub, the Imperial, in Cavan town.

Taking them there in his BMW 5 series car on December 26th, Smaleckas said that at about 9pm, while at a stop sign on the Naul Road, a 01 Toyota Celica allegedly driven by Claire Hickey, drove into the back of him.

According to Smaleckas, he and Ms Hickey got out of their vehicles, she gave him her name, address in Dublin, and the number of her insurance policy.

Smaleckas said he then drove his two passengers to the airport and home again to Cavan, a journey of 120 kilometres, taking one hour and 30 minutes under normal conditions in a roadworthy car.

He said that an hour after arriving home, he went to Cavan General Hospital and to his GP the next day. He had pain in his neck, back and knee, he said.

He had injuries to his lower back and neck. The soft tissue injuries had cleared up but the main injury was to his right knee.

It was “not the biggest injury in the world and the plaintiff is not making a meal of it”, said his barrister, Richard Lyons senior counsel.

But what Smaleckas had not counted on was the investigation into his claim by Aviva and the sort of questioning he would face in court as a result.

The Imperial night club was not open when Smaleckas claimed to have met his alleged passengers, Mantas and Aurelius. A man calling himself Mantas contacted a lawyer in the case shortly before it started to say he was not in Smaleckas’ car when it allegedly crashed.

Not only did Aviva never find Claire Hickey but they never found her crash-causing car either. It had been owned by a wholly innocent man who sold it, no longer fit for the road, for €300 to someone else.

Someone with the same name as that purchaser was found to have social media connections to two people in the motor trade who were connected to many of the 26 litigants in the cases associated with the six policies. Smaleckas himself, when he was not working in Lidl, the Imperial or pursuing his aboreal interests, was involved in motor trading in the Republic and Northern Ireland.

Investigators believe the Hickey car, plus the cars in the other claims, was bought for one purpose only: by owning it, the fraudsters had, through its registration plate, a vehicle identity through which they could obtain insurance cover.

All six cars were never driven and never involved in crashes.Their registrations were used only to buy the insurance policies.

In court, it was made clear to Smaleckas that he was going to have to prove all his assertions – he was facing “basically a full defence” (from Aviva), said Richard Lyons.

The point was driven home by Aviva’s barrister, Kieran Fleck SC, who said his version of events fitted a pattern.

Smaleckas’s lawyers produced a Google map showing roads around the airport but Smaleckas was unable to show where the alleged crash had happened.

His legal team knew the witnesses to be called and the sort of evidence they would give. He was going to be asked why he never contacted the gardaí.

After lunch, Mr Justice Keane was told Smaleckas was withdrawing his claim. Costs were awarded to the defendants.

Of the 26 claims arising from the six policies and prior to the incidents being detected as frauds, 12 litigants obtained compensation for personal injuries and/or material damage, allegedly sustained in crashes that insurers believe never happened.

Nine people who registered formal injury claims but did not pursue them. Three were defeated in court, one on appeal. Following the Smaleckas case this week, one remains outstanding.

Aviva’s head of fraud, Rob Smyth, said after the Smaleckas case that he hoped the gardaí would now investigate all the claims. The company had reported the incidents to them.

Since the six policies were taken out in 2013, the company had tightened its procedures and had over 50 people working to combat fraud, he said.

“Aviva is leading the way in the utilisation of advanced fraud data analytics to better identify such risk and prevent such frauds from impacting on our customers. Within the past 24 months, Aviva has based its Global Fraud Data Fraud Analytics Team in Dublin and we have enhanced our fraud controls with significant investment in IT anti-fraud solutions to identify potential fraudsters from obtaining Aviva products,” said Mr Smyth.

Saulius Smaleckas made no statement after withdrawing his claim. Efforts to contact him on Friday at Lidl Cavan town were unsuccessful. The Imperial said he had not worked there for some considerable time.