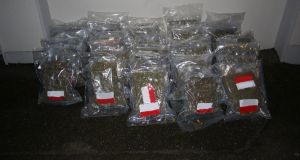 The drugs, which weighed 31kgs, were discovered after gardaí intercepted a vehicle in the Co Meath area.

A man has been arrested after cannabis with an estimated street value of €620,000 was seized by gardaí and Revenue officials on Tuesday.

The drugs, which weighed 31kgs, were discovered after gardaí intercepted a vehicle in the Co Meath area.

A man (32) was arrested and is currently detained pursuant to the provisions of Section 2 of the Criminal Justice (Drug Trafficking) Act 1996 at Ashbourne Garda Station.

A spokesman for Revenue said the operation was part of its ongoing joint investigations targeting organised crime groups and the importation, sale and supply of illegal drugs.

“If businesses or members of the public have any information regarding drug smuggling, they can contact Revenue in confidence on confidential phone number 1800 295 295,” he added.