Man arrested in relation to murder of homeless man 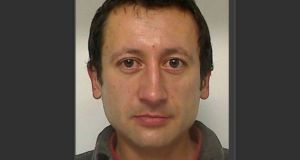 A man has been arrested in Co Meath in relation to the murder of homeless man Michal Kurek in 2017.

The 29-year-old suspect is being detained at Balbriggan Garda station under Section 4 of the Criminal Justice Act, 1984.

The body of Mr Kurek (33), originally from Dziewin in Poland, was found in a laneway off the R129, about 1km outside Ballyboughal in north Co Dublin, on August 4th last at about 10.40am. He had died from multiple stab wounds.

Mr Kurek had resided in Ireland since 2010, and frequented the Ongar area in Dublin 15.

Gardaí have made a number of public appeals since the killing.

Detectives believe Mr Kurek was murdered elsewhere and his body was left on the country road in panic.