Call for clarity on cap for personal injury damages 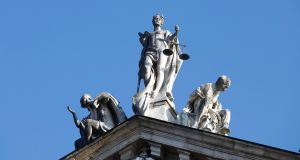 The Alliance for Insurance Reform has called for further clarity after a report published on Wednesday cited the “cap” on general damages in personal injury court awards as €500,000, and not €450,000 as had been previously believed.

The difference is important as the figure is used as a guide against which all other awards and settlements, including minor whiplash injury claims, are measured.

The gap between the two figures is approximately eleven per cent and is significant against a backdrop where business and the Government are hoping that lower court awards could lead to a reduction in the price of insurance.

The higher cap is cited in a report just published by the Law Reform Commission and is based on a 2016 judgment by Mr Justice Kevin Cross, who oversees the High Court’s personal injury list.

In that judgment Mr Justice Cross said the €450,000 cap had been set during the economic recession, and had returned to €500,000 as the recession was over.

“We note that the Law Reform Commission in its paper on Capping Damages in Personal Injuries Actions has indicated a cap on general damages in catastrophic cases of €500,000 based on a 2016 High Court decision, despite a series of more recent High Court and Court of Appeal judgements setting it at €450,000,” a spokesman for the alliance said.

He said the alliance, which represents a number of business bodies, would appreciate more clarity on the matter.

In a number of key judgments beginning in 2015, many delivered by Ms Justice Mary Irvine, the Court of Appeal referred to the cap for general damages, ie compensation for pain and suffering, as being €450,000 for catastrophic injuries.

The court said minor injuries should attract modest damages, and middling injuries moderate damages, so that catastrophic injuries could get awards that were clearly different in size.

The rulings were seen as having a dampening effect on the size of awards at High Court level.

In the 2016 judgment referred to the Law Reform Commission report (Woods vs Tyrell), Mr Justice Cross said the origin of the cap was in a Supreme Court ruling (Sinnott) where a person was not just given general damages but also special damages (to pay for the care necessary arising from catastropic injury).

In cases of lesser injuries, the plaintiff often got general damages but not special damages, he pointed out.

The cap “is not a yardstick against which other cases must be measured. It can of course be taken into account in a general way when assessing appropriate general damages in a ’non-cap’ case, but no analysis of the authorities can regard the cap on general damages as being the ’price’ in general damages for catastrophic injuries.

“To regard €500,000 or whatever the figure may be as being fair and reasonable compensation for catastrophic injuries is an insult not just to the injured parties, but to basic intelligence.”

In a judgment in March of this year (O’Connell v Martin), Mr Justice Michael Twomey referred to a 2017 ruling by Ms Justice Irvine in the Court of Appeal (Nolan v Wirenski), in which, he said, she rejected as “irrational and unjust” the suggestion that the cap for general damages in cases of catastrophic injury was less than would otherwise be the case because the injured party was also getting special damages. Mr Justice Twomey said he was bound to follow this ruling.

In her ruling, Ms Justice Irvine referred to €450,000 being “in or around” the figure awarded in the most serious cases, with more being awarded “in the rare case”, Mr Justice Twomey noted.

Ms Justice Irvine, who is now a judge of the Supreme Court, is chairing a committee of seven judges that is to provide a new guide for personal injury awards for judges at all court levels, under the auspices of the new Judicial Council. Neither Mr Justice Cross nor Mr Justice Twomey are on the committee.

Two remanded over failure to stay away from Strokestown farm