Brexit delays up to 20 extradition warrants to UK 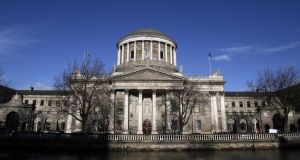 A House of Commons report found post-Brexit “there could be difficulties extraditing suspects between the Republic of Ireland and the UK, if the UK fails to opt back into the EAW (European Arrest Warrant)”. File photograph: Chris Maddaloni/Collins

Between a dozen and 20 extradition warrants sought by British police for suspects living in Ireland have been stalled due to legal appeals arguing it would be unsafe to extradite them to the UK due to its plans to leave the European Union.

One pending extradition order, made through the European Arrest Warrant (EAW) system, will be challenged in the Supreme Court, and an estimated 20 similar cases are awaiting the result of the appeal, according to several legal sources.

A House of Commons report found post-Brexit “there could be difficulties extraditing suspects between the Republic of Ireland and the UK, if the UK fails to opt back into the EAW.”

The report recognised politicians on both sides of the Border “have been consistently clear that the EAW has real benefits in swiftly tackling serious cross-border crime”.

If the UK fails to reach an agreement to remain in the European extradition framework, the alternative would be “cumbersome” negotiations with each individual member state, the report concluded.

One legal source familiar with extradition cases said the uncertainty had led to a notable “press” from British authorities to extradite wanted individuals in Ireland, as the Brexit negotiation time frame narrows.

Both the UK National Crime Agency and senior Garda figures have expressed concern about what extradition system will be in place between Ireland and the UK following Brexit.

Last month, Garda Assistant Commissioner John O’Driscoll said the future “operation of the European Arrest Warrant is probably the area of most concern” for gardaí, when it came to security issues caused by Brexit.

“Until we know the shape of the Brexit arrangement, it is difficult for us to address these issues,” he told an Oireachtas committee.

Prior to the EAW agreement extradition between Ireland and the UK was governed by an administrative system between the two countries which led to several high-profile disputes during the 1980s over the extradition of paramilitary suspects.

The EAW arrangement is based on the mutual recognition of certain legal standards and human rights between EU countries, recent legal appeals in the Irish courts claim those rights may not be guaranteed following Britain’s exit from the EU.

Any gap between Britain leaving the EAW system and a replacement arrangement “would pose an unacceptable risk”, a House of Lords report released in July stated.