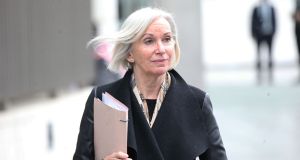 The Department of Justice has failed to find a replacement for Prof Marie Cassidy, who retired as chief State pathologist two years ago, despite two recruitment campaigns.

A worldwide shortage of pathologists is being blamed for the difficulties in recruiting qualified staff to the Office of the State Pathologist (OSP) which investigates all suspicious deaths in the State and assists in the identification of human remains.

“Recruitment to senior positions at the office remains challenging,” acting Chief State Pathologist Dr Linda Mulligan said in the office’s annual report for 2019, which was released on Friday.

There are currently just two State pathologists employed on a permanent basis as well as one locum and one part-time pathologist.

Last year a report by the Royal College of Physicians (RCP) raised concerns about the office’s ability to provide assistance in homicide investigations due to the staffing shortages.

This is a “major factor giving rise to recruitment challenges”, the RCP said.

Pay levels for OSP staff are also not considered attractive enough compared to equivalent positions in hospitals or in other countries, the report said.

“There are serious staffing difficulties currently facing the OSP,” the college said. “The primary concern is that there will not be enough staff to deliver the state forensic pathology service to the required level.”

It also noted that OSP staff spend a large portion of their time travelling around the country for their work. Last year staff spent the equivalent of more than 50 work days travelling to mortuaries.

“The loss of Dr Curtis, an experienced, dedicated and widely respected forensic pathologist, was a significant one, particularly so close to Prof Cassidy’s retirement. His expert guidance and in-depth forensic knowledge will be difficult to replace,” Dr Mulligan wrote.

Publishing the annual report, Minister for Justice Helen McEntee said her department “is fully committed to working with the OSP in the coming years to give practical effect to the recommendations of the review”.

There have now been two unsuccessful competitions for a permanent chief State pathologist with a third currently under way. The office is also seeking to recruit an ordinary State pathologist.

The OSP dealt with 188 suspicious deaths last year, down from 196 in 2018. In 34 of those cases (18 per cent), a forensic pathologist attended at the scene where the remains were found.

The office also assisted in 27 cases of skeletonised remains of which 13 turned out to be animal bones. All but one of the remaining human cases were found to involve “ancient remains”.