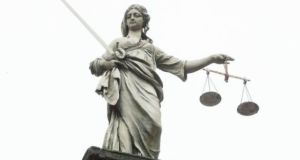 The man is due to appear before Ennis District Court on Saturday afternoon. Photograph: Alan Betson

A man has been charged over an aggravated burglary in which the occupants of a house in Limerick city were threatened and assaulted.

At about 5.30am on October 10th a man armed with a knife broke into a house in the Kennedy Park area of Limerick city.

He threatened the two occupants of the house and demanded money. He then assaulted one of the occupants and left the scene with a handbag containing cash.

Gardaíu said the occupants of the house were extremely shaken by the incident but did not require medical treatment.

Gardaí were contacted after the suspect left the home. Following enquiries, gardaí­ carried out searches in the southside of Limerick city on Friday.

During the course of these searches gardaí­ discovered clothing believed to have been worn by the suspect, a knife, and items stolen from the home.

Gardaí arrested a man aged in his 30s as part of the same operation.

He was brought to Roxboro Road Garda Station and is due to appear before Ennis District Court on Saturday afternoon.