A video circulating on social media showed a large crowd dancing to music on Grafton Street, believed to be just after 9.30pm, before Level 5 lockdown started at midnight. Source: Twitter 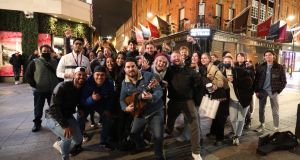 Gardaí broke up a large impromptu gathering with music on Grafton St, Dublin, just hours before the Republic entered Level 5 of the Living with Covid-19 plan at midnight.

However, Garda sources said the gathering on Wednesday night was not organised and appeared to have arisen as a number of people stopped around a street performer. More passers-by joined them over a short space of time and created a crowd.

The same sources said while some people in the crowd were drinking, the vast majority of those present were not consuming alcohol and appeared to have stopped “spur of the moment”.

Officers patrolling the south inner city through yesterday moved along a number of groups that were drinking around the Grafton Street area, with several groups also gathering at South William Street but being moved on.

Gardaí said when people were asked to move on they did so and while a video circulating on social media showed a large crowd dancing to music on Grafton Street, believed to be just after 9.30pm, those people left when they were asked to.

Gardaí familiar what the incident on Grafton St last night said a video in circulation - featuring the song Freed From Desire, by Gala – depicted the incident. However, another video being circulated, depicting more unruly scenes on Grafton Street, had been recorded some time ago and was not from last night.

The video has emerged as a major Garda operation was under way to coincide with the commencement of Level 5 across the Republic, with 2,500 gardaí on duty at any one time working extended rosters and encouraging people to stay at home unless their journey was work-related or for essential reasons. All non-essential retailers have also closed for the six-week duration of Level 5.

In reply to queries, Garda Headquarters did not comment directly on the video, but confirmed a group was moved on after it had gathered on Grafton Street.

“Gardaí in Dublin conducted regular high visibility patrols along Grafton Street and surrounding streets throughout yesterday evening,” the Garda said in its response.

“Gardaí asked any large groups to move on. All complied. No arrests were made.”

However, the Garda also stated that impromptu “gatherings, individual responsibility, social distancing, wearing of masks in public area and other such public health guidelines are not penal regulations”.

That means while people have been asked via public health advice designed to combat the spread of Covid-19 not to gather in groups and to socially distance and take other precautions, this was advice only. Gardaí do not have the power to take action against anyone not adhering to public health advice.

Enforcement arises with only a smaller number of measures, though further Garda powers for policing the Covid-19 pandemic in Level 5 were being considered and were expected to be rolled out very soon.