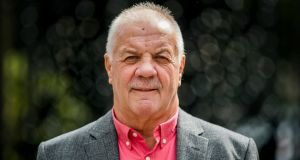 Peace agreements in Northern Ireland are not dependent on the United Kingdom remaining in the European Union, the North’s attorney general has said.

John Larkin QC said the EU was referenced only once in the British-Irish Agreement — the treaty that gave effect to the 1998 Belfast Agreement — and that was only a brief mention in the preamble.

Mr Larkin was making a submission at Belfast High Court during an ongoing legal challenge against a potential no-deal Brexit.

He said one paragraph of the treaty preamble referred to the UK and Ireland wishing to improve relations between their countries as “friendly neighbours and as partners” in the European Union.

“That can’t be boosted or given a steroid injection as to make it an obligation of continuing membership of the EU on one or both parties,” he said.

Mr Larkin also argued domestic UK law could not prevent a no-deal because provision for exiting the EU without an agreement was enshrined in Article 50 of Lisbon Treaty, which took primacy.

Mr McCord, whose son Raymond Jr was murdered by loyalist paramilitaries in 1997, alleges that a no-deal Brexit will plunge Northern Ireland into chaos, economic misery and threaten the peace process.

According to his legal team, the government is unlawfully trying to quit the EU without an agreement at any costs. They claim that such an exit departure breaches the European Union (Withdrawal) Act 2018 which safeguards the Belfast Agreement.

In court on Monday, Mr McCord’s lawyer Ronan Lavery QC said he had written to British government lawyers asking for an undertaking that British prime minister Boris Johnson will comply with the vote of the Houses of Parliament to delay Brexit if no agreement is reached.

Barry McDonald QC, representing another of the applicants, urged Lord Justice Bernard McCloskey, if he found in their favour, to compel the government to abide by the law.

Referring to speculation Mr Johnson could send two letters to the EU, one asking for an extension and the other stating he did not want an extension, Mr McDonald suggested there was an attempt to “sabotage” the will of Parliament.

“There’s an indication of an intent to subvert the purpose of the Act,” he said.

Counsel for Mr Johonson said Brexit laws impose no obligation on the United Kingdom to negotiate a withdrawal agreement with the European Union.

Tony McGleenan QC insisted that once notification was given, the departure process became “inexorable”.

He argued that d the legislation does not impose a duty on a member state to agree terms.

“Article 50 anticipated precisely the concept of a no-deal exit from the EU.”