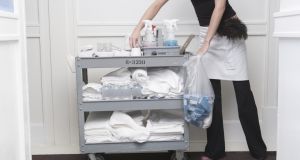 Because Ms D was the only female on the staff, she was asked to carry out chambermaid duties at the business in addition to her bar duties. Photograph: Charlie Schuck/Getty

A bar worker who suffers from an extremely painful condition called endometriosis has won her discrimination case against her employer.

The Workplace Relations Commission (WRC) has ordered that a publican pay €20,000 to the woman, referred to as Ms D, after the commission found he discriminated against her on the grounds of gender and disability.

Ms D suffers from endometriosis, a uterine disorder in which tissue that lines the uterus grows in other places of the body such as the ovaries, the fallopian tubes and on the bladder, causing chronic pain.

In the case before the WRC, Ms D underwent a surgical procedure for her endometriosis in October 2015 and was supplied with a doctor’s certificate stating that she was capable only of light duties and to not undertake any heavy lifting on returning to work.

However, on returning to work, Ms D found that her hours were reduced sharply.

Ms D asked why she could not continue with her normal hours as before in the bar and was told that the way her boss saw it, working in the bar and the reception involved heavy lifting.

Ms D was then handed her a letter which stated: “From a health and safety point of view, we will be unable to offer you any work until you inform us that you are fit for work.”

The commission heard that prior to the surgical procedure, because Ms D was the only female on the staff, she was asked to carry out chambermaid duties at the business in addition to her bar duties.

Ms D told the hearing, which was held in Gorey, Co Wexford, that when the two other male bar workers came in for work she was sent off to clean rooms.

That work was physically much more demanding than her role as a bar worker and she was required to carry heavy linens, lift heavy mattresses when making beds and carry heavy items up three flights of stairs.

Ms D said she found the work extremely demanding because of her endometriosis. She said her hours began to be reduced significantly in comparison to her two male employees.

The two male employees who took up employment after Ms D were consistently provided with full-time hours in their roles as bar staff, thus essentially leaving Ms D only with whatever remaining hours were available.

In her decision that Ms D was discriminated against on the ground of gender, WRC adjudication officer Niamh O’Carroll Kelly said that the employer provided no reasons which could objectively justify why Ms D was treated less favourably than her male counterparts.

Ms O’Carroll Kelly also found the publican discriminated against Ms D on the grounds of disability after finding he was fully aware she had undergone a small surgical day procedure and was certified fit to return to work, albeit restricted to light duties for a period of one week.

Ms O’Carroll Kelly also found the employer took no steps to consult with Ms D or her medical advisers in order to ascertain what reasonable accommodation or appropriate measures could have assisted her in maintaining her work role.

Ms O’Carroll Kelly recorded that without any knowledge, assessment, consultation, or even reading the certificate submitted, the employer made, “what can only be described as a bizarre decision” to take Ms D off the roster and Ms D resigned from her position shortly after that.

Awarding Ms D €20,000, Ms O’Carroll Kelly found she “has established a prima facia case of discrimination on the grounds of gender and disability”.

She found the employer had failed to objectively justified the cutting of Ms D’s hours and had failed to provide reasonable accommodation in relation to her disability.

Man (50s) killed in single vehicle crash in north Co Dublin 16:59
No plan for legislation to close meat plants in cases of Covid-19 outbreaks 16:57
Accused claimed ‘I know what it’s like to be a murderer’, trial told 16:08
Bus Éireann to shut many inter-city routes due to financial pressures 16:00
Northern Ireland reports 220 new cases of Covid-19 14:54