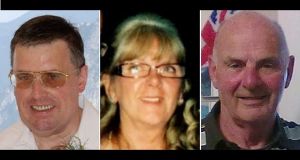 Iain Provan, Elizabeth Allan and Len Stern, who died after a car lost control and left the road at the Jim Clark Rally near Coldstream in the Scottish Borders in May 2014. Photograph: Police Scotland/PA Wire

A former rally car driver involved in a crash which killed three people broke down as he told an inquiry he saw a woman “flying in the air”.

David Carney (29), from Co Mayo, said he lost control of the vehicle after going over a bridge and then realised he was heading towards spectators.

He said he no longer rallies, and, more than three years on from the crash, “every time I close my eyes at night I still see three people lying in the road.”

He was giving evidence at a fatal accident inquiry examining the deaths of photographer Iain Provan, 64, his partner Betty Allan, 63, and Len Stern, 71, at the Jim Clark Rally near Coldstream in the Scottish Borders in May 2014, as well as the death of Joy Robson, 51, at the Snowman Rally in Glenurquhart in the Highlands the previous year.

Mr Carney told Edinburgh Sheriff Court he had been an amateur rally driver since 2008, competing in races at home and overseas, and had driven the Jim Clark Rally in 2013.

He said his vehicle had come off the road during the rally the day before the crash on May 31st and hit a tree.

Mr Carney said it had been repaired by his team of engineers, then undergone further repairs on the day of the crash as the rear had felt unusual during the morning stages.

He said once those repairs had been carried out the car “felt perfect”, and he had expected to go over the bridge with no problems.

The court was shown photos of the car landing and swerving to the left, then right.

Mr Carney said: “I steered into the slide but the car just kept coming. It seemed to just go that quick, I couldn’t catch it.”

He told the police in a statement: “I knew at this time I was a passenger as I had the steering wheel fully locked and I couldn’t do anything else.”

He told the court: “The car continued to turn round 180 degrees while sliding back off the road.”

Andrew Brown QC, for the Crown, asked him: “Were you aware that the car was heading towards spectators?”

Mr Carney became emotional as he replied: “Only when I looked after I knew the car was gone.

“I grabbed my helmet and started shouting ‘no, no, no’. I knew I had lost control at that point.

“It didn’t seem real at first. I remember seeing dust and a woman flying in the air.”

He said there was “disbelief” after the car came to a stop and he got out to see if he could help the people lying on the ground.

He said: “I went over to someone who was getting up from all fours and someone was running down to them. I said sorry.

“I wanted to try and help in some way but I didn’t know how.”

Mr Carney said he “couldn’t figure out” why the car had crashed.

The inquiry heard from official reports stating there were no defects on the car and concluding the crash at 81mph (130km/h) was likely to be either due to the car going too fast for the driver’s ability, not being aligned to a slight deviation to the right on landing, not landing in proper alignment or a combination of these factors.

Mr Carney said he did not believe he had been going too fast, and added: “It seemed to be okay from the moment we left the bridge to the split second we landed and then it just went.”

Earlier on Thursday, marshal Tom Roger, 27, told the inquiry the crash site was a like a “war zone”.

He said if he had known people were standing in the area before the crash he would have stopped the cars, but he had been standing further along the road out of sight of the area.