August 11th, 2017: Local reporter Alex Rose covered the Molly Martens Corbett and Thomas Martens trial for Fox 8 News. Here he gives us insight into what happened in the courtroom. 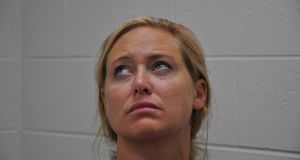 A key piece of evidence which led jurors to convict Molly Martens Corbett and Thomas Martens was the presence of a paving brick on the nightstand in the room where Jason Corbett was killed, the foreman of the jury has said.

Tom Aamland said the question that most readily jumped off the page for jurors was that no explanation was offered for the brick or cement paver being in the master bedroom at their home in Wallburg, North Carolina.

“There was a concern about [the paver],” Mr Aamland said. “No explanation about why it was there, when we went in for deliberations, that was the first question everybody had in their mind. Why was it there? Why was there a paver in the bedroom? Why was it on the nightstand? It was just a strange thing to see.”

On Wednesday, the jury found Martens Corbett and her father guilty of the second-degree murder of her husband. They were sentenced to a minimum of 20 years and a maximum of 25 years in prison.

Mr Aamland described some conversations had between he and his colleagues, all of whom he said had grown close over the last 30 days.

He gave a glimpse into some of the reasons behind the jury’s decision.

“I would say the weapons and the spatter, not just on the walls, but on clothing also,” Mr Aamland said. “That was convincing on the proximity of where people were standing at the time of the strikes. That was one of the factors that convinced us to go with a 12-0 vote for Molly.”

Mr Aamland said bits of flesh that stuck to Martens Corbett’s clothing were key to surmising what happened to Mr Corbett. Admitting that there were questions jurors wished they could ask of witnesses, Mr Aamland said he felt confident they got it right when Judge David Lee’s verdicts showed little leniency.

The fact that Martens Corbett did not immediately commence CPR was also a concern.

“There were a lot of questions about delay of time,” Mr Aamland said. “There were some questions as to Molly being certified. She should have started immediately, rather than wait six minutes into a phone call with 911 for them to tell you to start.

“If you’re trained for CPR like I am, you react immediately. If you want the outcome to be different, you don’t act.”

He also said he believed Mr Corbett was on the ground when he was struck.

“The damage to the walls . . . makes you wonder,” Mr Aamland said. “There was a strike on the wall down at the baseboard. The only way that gets there is if there was a downward swing, which means that there was immobility on Jason’s part.

“Blood on the back of the door – was he trying to get out at the time to get away from it? We don’t know, but that was a thought in our head.”

Furthermore, in a vicious struggle in the early morning, Thomas Martens’s wife Sharon was said never to have seen or heard from until detectives arrived on the scene, having apparently remained in the basement throughout.

“We were curious as to how that was,” Mr Aamland said. “Nobody heard anything from downstairs? How that could be, we’re not sure.”

Davidson County District Attorney Garry Frank said the Corbett family had apprehensions initially of whether the justice system in the US would serve them well, but said family members had expressed their appreciation.

“We honestly felt like we put on the relevant evidence that was permissible to give the jury the chance to make a decision,” Mr Frank said. “We are gratified that they believed our position on the case. We believe justice has been done.”