Search for Trevor Deely remains to continue through weekend

Castleknock operation expected to continue for at least one more week, possibly two 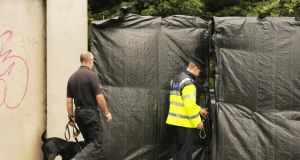 The scene of the search this week for the body of Trevor Deely in Chapelizod, Co Dublin. Photograph: Collins Photos

A search and excavation operation at a site in Dublin where the remains of Trevor Deely may have been concealed 16½ years ago is continuing this weekend.

The site is also to remain securely sealed off with Garda members posted there on a 24-hour basis. A CCTV system installed by the Garda Síochána to ensure the site was not interfered with once the dig got under way is also being constantly monitored this weekend.

A no-fly zone put in place over the site when gardaí realised a drone was to be flown over to capture images of the search and dig, will also remain for the duration of the operation.

The site is hidden by a wall around most of the perimeter. Those places where railings and gaps in the wall allowed passersby look into the site have been covered with black plastic sheeting.

The search operation is now in its ninth day and is expected to continue for at least one more week, possibly two.

A handgun has already been found at the site and has been undergoing ballistic testing. However, it is unclear whether it is linked to the disappearance and presumed murder of Mr Deely.

The Bank of Ireland employee was aged 22 years when he vanished near Haddington Road in Dublin’s south inner city in the year 2000. He was walking home after a Christmas party in the early hours of December 8th. Mr Deely was last captured on CCTV on Haddington Road after 4am and then vanished.

No trace of him has ever been found.

CCTV images recorded in the area where he was last seen alive were enhanced in the UK earlier this year. They showed an unidentified man speaking briefly with Mr Deely and then following him on the street.

In recent months the Garda has come into information suggesting the missing man was shot dead in a chance encounter on the street just after the last CCTV images of him were recorded.

The information suggests his remains were taken to the three-acre site, a wooded area on the banks of the river Liffey, and hidden there to conceal the murder.

Senior Garda officers are hopeful of a breakthrough in the case. However, they have cautioned they could not be sure the information they have is accurate unless and until Mr Deely’s remained were found on the Chapelizod site.