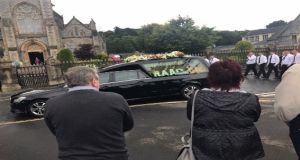 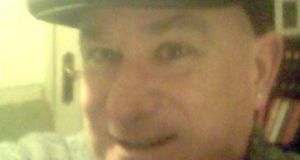 Kevin ‘Flat Cap’ Murray died at his home in Townsend Street in Strabane on Wednesday. 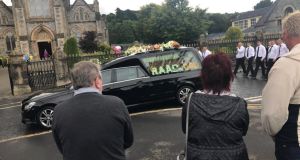 A relatively low-key funeral was held in Strabane, Co Tyrone on Saturday for Kevin ‘Flat Cap’ Murray, one of the suspects over the shooting dead of Kinahan gang member David Byrne at the Regency Hotel in Dublin last year.

The funeral heard that Mr Murray (47), who had motor neurone disease, faced his sickness “bravely”.

“During our lives we make many decisions, some good, some bad, some indifferent and in this regard Kevin was no different than the rest of us,” Fr Declan Boland told more than 300 mourners at the Church of the Immaculate Conception in Strabane. There were no paramilitary displays at the funeral.

Mr Murray, also known as ‘Flat Cap’, was arrested in Northern Ireland last September in connection with the gun attack at the Regency Hotel in February 2016. At the hotel, men dressed as gardaí opened fire with automatic weapons during a boxing weigh-in, killing Mr Byrne.

Mr Murray was photographed at the weigh-in. Gardaí believed he played a “cental role” in the attack.

The shooting further ignited the murderous feud involving gangs led by Christy Kinahan snr and Gerry “The Monk” Hutch, which has resulted in 12 deaths.

Men in white shirts and black trousers at funeral but low key and no paramilitary display. pic.twitter.com/W5g6kaf5lQ

Fr Declan Boland at Mass said Kevin Murray like many in Strabane "was caught in vortex of (Troubles) upheaval". pic.twitter.com/jRo3kXNhyQ

Mr Murray, who served time in the 1980s on IRA offences, was arrested in September last year and faced extradition to the South on murder and firearms charges.

However, in May this year a Belfast court decided that Mr Murray should not be extradited as he was in the late stages of terminal motor neurone disease and had not long to live. He died at his home in Townsend Street in Strabane on Wednesday.

There were no dissident republican paramilitary trappings at the funeral although a group of men wearing white shirts, black ties and black trousers were towards the front of the cortège as it made its way to the church.

Mr Murray was a known dissident republican but the only overt reference to his past was a floral wreath in the hearse with the letters RAAD, the Republican Action Against Drugs.

RAAD was a vigilante group which operated mainly in the Derry and Strabane area, targeting alleged drug dealers. It was also linked to the Real IRA.

Mr Murray is survived by his two children, Navinne and Shane, his parents, Anne and John, sister Annette and brothers Darren, Gerard and Terry.

At the funeral Mass Fr Boland, who administered to Mr Murray over recent months, offered his condolences to the relatives.

Fr Boland described how in 2016 Mr Murray was diagnosed with a “virulent and aggressive” form of motor neurone disease which eventually paralysed him from the neck down to the extent that he could communicate only with his eyes.

“He faced his sickness bravely,” said Fr Boland. The priest said that Mr Murray “like many of his generation in Strabane and further afield was caught up in the vortex of social and political upheaval”.

Fr Boland said that God gave people free will. “But the decisions we make will always have consequences, that is why we have to choose wisely and prudently so as to be faithful to the life in Christ we received in our baptism. This is a big challenge and we have to be constantly faithful to our calling,” added Fr Boland.

The PSNI maintained a discreet presence at the funeral. After the Mass the funeral cortège with the hearse flanked by the group in white shirts and black ties and trousers made its way to Strabane cemetery where Mr Murray was interred.