Firearm found at Trevor Deely search site is being examined

As Chapelizod site excavation goes on, Garda warns gun may not be linked to missing man 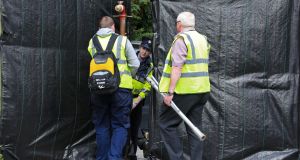 Visual barrier at the entrance to the site of the search for the body of Trevor Deely, who went missing from the Haddington Road area of Dublin almost 17 years ago. Photograph: Colin Keegan, Collins

Gardaí will on Thursday resume their search of a site near Chapelizod for the remains of Trevor Deely, the 22-year-old man who disappeared while walking home from a Christmas party in Dublin in December 2000.

The search was launched after gardaí were informed Mr Deely was shot dead after a chance meeting with a criminal figure in the early hours of December 8th, 2000, and buried in an underground pipe or drain on the site.

Hopes of a breakthrough in the case increased when a gun was found on the site during Wednesday’s search operation. The firearm is undergoing ballistic examination to determine whether it was used in any crimes.

Garda sources said the gun would not be linked to Mr Deely’s assumed murder unless his remains are found.

“Even if we did find a body, you don’t know if the cause of death, or even any wounds or injuries, could be identified from the remains,” said one officer.

Gardaí have been told Mr Deely, a Bank of Ireland employee, was shot in Dublin’s south inner city. He was last recorded on a CCTV camera on Haddington Road after 4am on the night he disappeared. Despite a massive, high-profile investigation, no progress has ever been made in the case.

Last April, gardaí released some of the final CCTV images of Mr Deely. On enhanced footage, a man can be seen conversing with Mr Deely and later following him on the street.

Since then, a Garda team at Pearse Street station has received information from a source regarded as credible. This suggests Mr Deely was shot in a chance encounter on the street just after the last CCTV image of him was recorded.

The same source has identified the site at Chapelizod as the location at which his remains were dumped in panic to conceal the murder.

Gardaí say they cannot be sure the gun found in Chapelizod is linked to the case or that Mr Deely’s body will be found there. The same sources have said that unless Mr Deely’s remains are found, the latest flurry of activity would come to nothing.

However, An Garda has described the operation at the site as the “most significant” search it has done since Mr Deely disappeared.

The site has been split into five sections, with a number of search operations – from an initial visual examination and fingertip search to full excavation – set to take place at each section. Cadaver dogs are also being used.

On Wednesday, a refuse truck was among several vehicles that went into the site to take away material.

The three-acre densely wooded site is situated across the road from the West County Hotel, just outside Chapelizod village. Gardaí moved into the area to begin preparing the site for a major search late last week.

Black tarpaulin has been hung on the gates and over gaps in the wall to prevent the media or onlookers peering into the site and taking photographs or video footage. A number of portable cabins as well as a portaloo and a CCTV system have been set up as gardaí prepare to continue their search for several weeks.

Garda officers have been keen to dampen expectations of a major breakthrough, saying they still cannot be sure the information they are pursuing is accurate.