Two months of Charleton inquiry ‘entirely’ due to false leaks

Mr Justice Peter Charleton asks ‘why are we here?’ 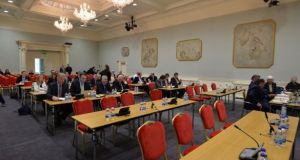 The current module of the Charleton Tribunal began on January 8th last, has heard evidence over 21 days, and is likely to cost in excess of €1 million in legal fees. File photograph: Alan Betson

The Charleton Tribunal’s inquiries over the past two months came about “entirely” because of false leaks to the media about Sgt Maurice McCabe and had no other basis, the tribunal has been told.

In a submission on behalf of former garda commissioner Nóirín O’Sullivan’s legal team at the O’Higgins Commission, Paul Sreenan SC said there was never any proper basis for asking the tribunal to investigate the treatment of Sgt McCabe at the commission and that inquiry came about “entirely on the basis of leaks of false information” about how Sgt McCabe had been questioned at the commission.

These links had now “been demonstrated to be false.”

“False allegations of sexual abuse were not relied on at all at the commission hearings and the transcripts show this,” Mr Sreenan said.

“Clearly there were leaks, the leaks were false, and the end result was they ended up in the terms of reference.”

Speaking as he heard legal submissions, the tribunal chairman, Mr Justice Peter Charleton, noted Frances Fitzgerald had to resign from Government last year because of a public discourse that Sgt McCabe had been accused of sex abuse at the confidential hearings of the 2015 O’Higgins Commission, that she knew about it, and did nothing to stop it.

“Where did that come from?” Mr Justice Charleton asked during today’s sitting.

The chairman has noted there is no evidence to show that any sex abuse claim was ever put to Sgt McCabe at the commission. In his evidence earlier this week Sgt McCabe said that he never claimed it had.

“Why are we here?” the chairman asked. “This has now gone on for two months.”

The current module or series of sittings of the tribunal began on January 8th last, has heard evidence over 21 days, and is likely to cost in excess of €1 million in legal fees. The tribunal, the terms of reference for which were set by the Oireachtas, has now adjourned until March 20th when it will start a new module.

The sittings were held to investigate whether false allegations of sexual abuse or other unjustified grounds were relied on by Ms O’Sullivan at the confidential hearings of the commission in 2015, to discredit Sgt McCabe.

The commission investigated complaints made by Sgt McCabe about certain policing matters. Its final report supported many of his complaints but found that allegations he had made against senior garda officers had no basis.

Shane Murphy SC, for the Garda HQ, said in the wake of the O’Higgins Commission, “selective leaks” from the confidential hearings activated an intense public controversy. It was an “extraordinary public event that had consequences” one of which was the creation of the tribunal.

He said Sgt McCabe demands perfection from everyone around him but when he makes an error a different standard applies.

“Errors do not always arise from spite or malice on the part of those that made them,” he said.

Mr Murphy said a “popular narrative” had been propagated in the wake of the O’Higgins Report that was “entirely inaccurate” and which led to a “storm of popular outrage”.

He said during his evidence to the tribunal Sgt McCabe had maintained a position that showed how people who became emotionally involved in a situation can “lose perspective”.

In his evidence Sgt McCabe said he still believed “in his heart” that if he had not been able to produce a secret recording of a 2008 meeting, a false allegation made against him at the commission hearings would not have been corrected. This was despite the fact the false allegation was contained in a submission that was handed into the commission, by Ms O’Sullivan’s legal team, at the same time as a report that showed the submission contained an error.

Patrick McCann SC, for the Department of Justice, said no-one at the tribunal had taken issue with the view adopted by the department that it was correct and appropriate that Ms Fitzgerald should not have intervened in what was happening at the commission. He said if the department had been told that false allegations of sexual abuse were being used to discredit Sgt McCabe at the commission, that would have been different as it would have raised a question as to confidence in the then Garda Commissioner.

Michael McDowell SC, for Sgt McCabe, said the false allegation against Sgt McCabe made in a submission at the commission hearings by Ms O’Sullivan’s legal team, was made on her behalf. It was abundantly clear the “entirely false” charge was an unjustified ground used to discredit Sgt McCabe.

The false allegation, which referred to the 2008 meeting taped by Sgt McCabe, suggested he had made a serious complaint about a senior officer for his own reasons and in bad faith. The error was discovered during the commission hearings and the matter resolved. There has been no evidence heard by the tribunal to directly link Ms O’Sullivan to the error.

Settlement of €80,000 for girl injured after aunt had partial seizure while driving