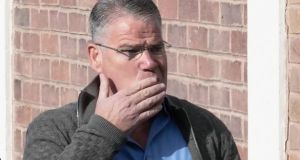 Kinahan cartel associate Thomas Kavanagh is likely to be freed from prison in just over one year despite being jailed for three years this week when he appeared in a court in the UK. Photograph: Jason Roberts/PA Wire

Kinahan cartel associate Thomas Kavanagh is likely to be freed from prison in just over one year despite being jailed for three years this week when he appeared in a court in the UK.

One of the Criminal Assets Bureau’s first targets when it was established just over 20 years ago, ‘Bomber’ Kavanagh is a career criminal and a significant member of the crime cartel’s operations.

While he was jailed for three years on Monday in England for possession of a 10,000 volt stun gun at his Birmingham home in January, remission and the use of electronic tagging in Britain means his jail time is likely to be 13½ months.

That period out of circulation is a blow to him and is the latest in a series of developments that makes life more uncomfortable for the Irish section of the Kinahan cartel; the Byrne organised crime group.

That group, which had always been based in Dublin, was first led by Christy Kinahan almost two decades ago, then by Freddie Thompson and for the past decade by Kavanagh’s brother-in-law Liam Byrne (38).

However, Byrne’s home on Raleigh Square, Crumlin, has been seized by the Criminal Assets Bureau and he has left Dublin and relocated to Birmingham where Kavanagh (51) has been living for more than a decade.

Kavanagh has lived in Tamworth, outside Birmingham, where Christy Kinahan first settled when he left Ireland. He is still regarded as a key cog in the Dublin-based Byrne organised crime group. He also has the ear of the Dubai-based leadership of the Kinahan cartel.

With Freddie Thompson serving life in a Dublin prison for one of the murders in the Kinahan-Hutch feud and Liam Byrne effectively exiled in England, the leadership of the Byrne organised crime group in Dublin is under pressure; now exacerbated by Kavanagh’s jailing.

As well as his close association with the Byrne organised crime group in Dublin, Kavanagh has also run his own criminal grouping in Birmingham, which his associates there were now expected to run in his absence. Gardaí believe that Birmingham faction led by Kavanagh has been linked to the Kinahan crime cartel in the same way the Byrne organised crime group in Dublin has been.

Like Liam Byrne in Dublin, Thomas Kavanagh has presented himself in Britain as a dealer of luxury vehicles. He has run a one-man independent UK car sales outfit with no offices or forecourt.

Gardaí believe the auto businesses have been used to launder drugs money and that cars have been exchanged between the companies in the UK and Ireland as payment for drugs.

Gardaí also believe the car companies have loaned cars, on a sale or return basis, to each other’s groups of associates. This has enabled a large group of criminals in England and Ireland to drive luxury vehicles they do not legally own and so which cannot be seized from them.

If stopped in the cars in Dublin by the Garda, they have claimed they are driving a car loaned by a UK garage for an extended test run. And the criminals based in England have done the same; claiming the vehicles they have been stopped in were loaned to them by a Dublin garage.

In July, 1999, Cab secured an order against Kavanagh for £106,000 for unpaid taxes on income the bureau said was derived from criminal activity. His house on Knocknarea Avenue, Drimnagh, was eventually seized from him; Kavanagh among the first Cab targets when it began operating back in 1996.

In October, 2000, when a group of people assaulted a witness in the Four Courts, Dublin, after they gave evidence against Liam Byrne during a criminal trial, Thomas Kavanagh was one of the attackers. At that time he also threatened to kill a detective who was investigating drug dealing gangs in Crumlin and Drimnagh.

Among his convictions in Dublin are for burglary, drunkenness, two for actual bodily harm, two for making threats to kill and one for possession of a firearm, for which he served a lengthy sentence. However, since relocating to Britain he has been convicted only once; for failing to pay £83,000 in tax and supplying false payslips for a mortgage application, for which he was given a suspended sentence.