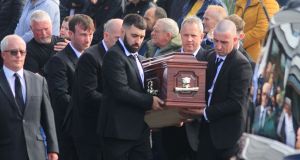 The remains of Vincent Parsons leave the Church of the Transfiguration following his funeral Mass in Bawnogue, Dublin on Tuesday. Photograph: Collins

A father-of-two young children died as a result of a “senseless act of savagery” and his family has been left in “freefall” as a result, mourners at his funeral were told on Tuesday.

“It takes days, weeks, months, years to raise a child to a point where they can make their way in life and raise a family.

“But it just takes minutes to wipe that all out in a senseless act of savagery”, Fr Pat Coughlan told the congregation at the funeral Mass in Dublin of Vincent Parsons.

The family of Mr Parsons, a hardworking and popular family man, “are now left to carry that grief”.

Mr Parsons (34), a welder, died in hospital two days after he was brutally assaulted while on his way home after socialising with friends in the Killinarden public house in Tallaght on Saturday, August 24th.

He was taken to Tallaght hospital after he was found on the roadside outside a Mace shop and Killinarden post office at the Killinarden housing estate early that morning.

He remained in a critical condition with head injuries until he was pronounced dead on Monday, August 26th.

A man in his twenties was arrested some days later and released without charge. A file has been sent by gardaí to the Director of Public Prosecutions.

Hundreds of people, including schoolchildren and many young people, packed into the Church of the Transfiguration, Bawnogue, on Tuesday to say a farewell to the young man.

Many were in tears as Mr Parsons’s son Gerard (5) helped carry the face mask his father used for welding to place on the coffin as one of the symbols of his life.

The child solemnly informed Fr Coughlan that a backscratcher also placed on the coffin was used by him “to scratch Daddy’s back”.

Mr Parsons’ daughter Jade (14) carried a photo of the family.

Mr Parson’s wife Claire and their two children, along with his mother Josie, aunt Mary, brother Danny and sisters Marian, Celine, Elaine and Leighanne, were among the chief mourners along with many from his extended family.

His brother-in-law, Gerard Kennedy, described Mr Parsons as his “best friend and teacher in life”, “a great Dad” and “one of the nicest men going”.

If Mr Kennedy was having a bad day, Mr Parsons would say, “don’t worry about it, throw a shelf up there”.

Mr Kennedy said his sister Claire had the “happiest days of her life” with Mr Parsons and the couple had two great children.

‘He will be missed’

Known to some as Vincent, some as “Vino” and by other names including the “Silver Fox”, whatever Mr Parsons was called, he “was the same to us all” and “was taken from us all in the cruellest way”.

“To say he will be missed is an understatement, we are all heartbroken. May you get the biggest bed up there, may you rest in peace.”

In his homily earlier, Fr Coughlan said, when Mr Parsons’s brother Danny was asked to describe his hobbies, he had said Vincent’s hobby was his family.

“He was a loving partner, dedicated to his wife Claire and two beautiful innocent children, Jade and Gerard.”

He was also a hard worker, who provided for his family, liked to work out in the gym and was very sociable.

The priest said just about everyone whom he had spoken to in recent days were “utterly shocked” by what had happened to Mr Parsons.

Those are neighbours and outsiders and one can only imagine the “chaos” this has caused to his wife and family both because of the suddenness of his death and the extremely tragic nature of it, he said.

The family had to carry this grief and he hoped faith would help them with that and help them “to make sense of what does not make sense”.

After the funeral Mass, Mr Parsons was buried in Newlands Cross cemetery.