British man charged over seizure of heroin worth €1m 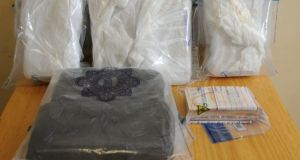 An image released by gardaí of the heroin seized over the weekend during raids in Dublin and Meath.

A UK national has been remanded in custody after gardai seized about €1 million worth of heroin following raids in Dublin and Meath.

Searches were carried out in a joint operation at the weekend involving members of the Garda National Drugs and Organised Crime Bureau and the UK’s National Crime Agency.

Seven kilos of heroin were recovered while three men were arrested and held at Dublin Garda stations.

Kuldip Singh (55) from the Birmingham area, in England, was charged in relation to the seizure and appeared before judge David McHugh at Blanchardstown District Court on Tuesday.

He made no application for bail.

The accused, who also had an address at The Hollows, Spawell, Dublin 6W, was charged with two offences under the Misuse of Drugs Act, for possession of heroin, and having it for the purpose of sale or supply.

The offence is alleged to have taken place on Saturday at a B&B in south west Dublin.

Mr Singh replied: “I had no knowledge of the drugs” after he was charged, the court was told.

Defence solicitor Wayne Kenny told the judge his client was reserving his position in relation to bail.

An application for legal aid was made and Mr Kenny furnished the court with statement of his client’s means.

The judge asked Det Garda Curran if he was satisfied with the statement of means. He replied, “So far, yes.”

The judge asked him if his answer was “conditional or absolute”; the detective said, “conditional”.

On that basis, the judge held that he was not going to grant legal aid without supporting documentation.

Mr Singh was remanded in custody to appear at Cloverhill District Court next Tuesday.

One man, in his forties, was released without charge, with a file being prepared for the Director of Public Prosecutions. Another man remained in Garda custody on Tuesday.